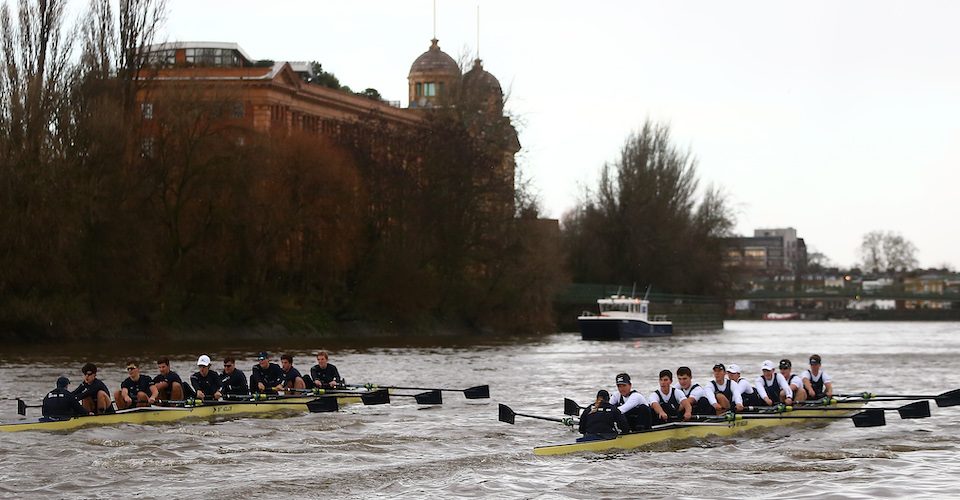 This year, Oxford’s Men chose to name their crews, Reggie and Flea. These are the nicknames of the first, Second Lieutenant Reginald Fletcher, and the last, Lieutenant Colonel William Fletcher DSO, Blues to die in World War 1. Studying at Balliol and Christchurch, they raced in the 1890 – 1893 and 1914 Boat Races.

In a closely fought race, both crews were level as they reached the end of the Putney Embankment. It was Flea, racing in white who had the early advantage around the first bend. However, Reggie, who was warned for their steering never allowed Flea to move out by more than ⅓ of a length. Fighting through the wind and rain, the Umpire repeatedly warned both crews for their steering as both crews moved to within inches of each other, close to clashing. As the Hammersmith bend started to take effect, Reggie took advantage of this and despite, aggressive steering from both coxes, they moved out to half a length. Reggie maintained this advantage past St Paul’s School and tried to see off the challenges from Flea as they tried to dominate through the choppy water.

Passing the Chiswick Eyot, Flea began to move back, eating into the lead of Reggie. Spurred on by Cox, Anna Carbery, they attacked around the outside of the bend and consequently, at the end of Reggie’s long advantage, the crews were level. Passing the bandstand and entering the final third of the race, it was Flea, who once again had the corner advantage. By this point, the water had calmed down thus allowing the crews to regain composure As Flea capitalized on this, the crew moved out to a lead of one length as they left the shadows of Barnes Bridge behind. This decisive move from Flea left Reggie trailing and unable to come back into contention. In a closely fought race, where neither crew backed down from the challenge, it was Flea who were victorious by 1 and ⅔ of a length.

OUBC President, Felix Drinkall, is absent due to injury.