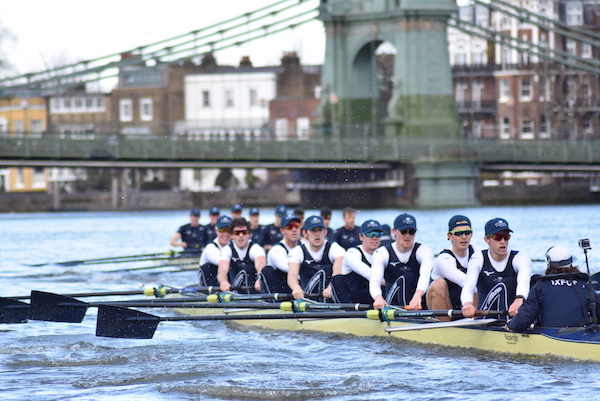 OUBC raced Trial Eights as part of their preparation for The Boat Race in March. This year’s eights, named Hurley and Burly, raced at 12:00. Hurley, stroked by OUBC President Augustin Wambersie, won easily over Burly having led the race from the first minute.

Conditions were relatively tame with scattered clouds, calm waters, and temperatures ranging from 5 to 7 degrees.

Umpired by 2020 Men’s Boat Race umpire Sarah Winckless, the race went off smoothly with both crews coming off high strokes relatively even. Hurley, wearing dark blue, began to walk away as they settled into their base.

As the crews rowed under Hammersmith Bridge, Hurley had stepped out to an open water advantage allowing them to row comfortably out front. By 8 minutes in, Hurley had put Burly in their wake, as they continued to push away.

Hurley crossed the line with a significant margin over Burly. The race had little drama and no technical issues.

Prior to the race, OUBC President Wambersie, explained that “Trial Eights are extremely important for all members of the club… for newcomers it will be their only crack at the course before the real deal.”

What’s at stake for the rowers? “Bragging rights,” Wambersie clarified. “A solid performance can also be helpful for selection,” he continued. “Trial Eights tests rowers to see how they react in the Boat Race environment.”

With this year’s Trial Eights in the books, the Oxford rowers return home for a final few weeks of training before the holidays. Winter training camp begins early January where selection for the Boat Race will ramp up.