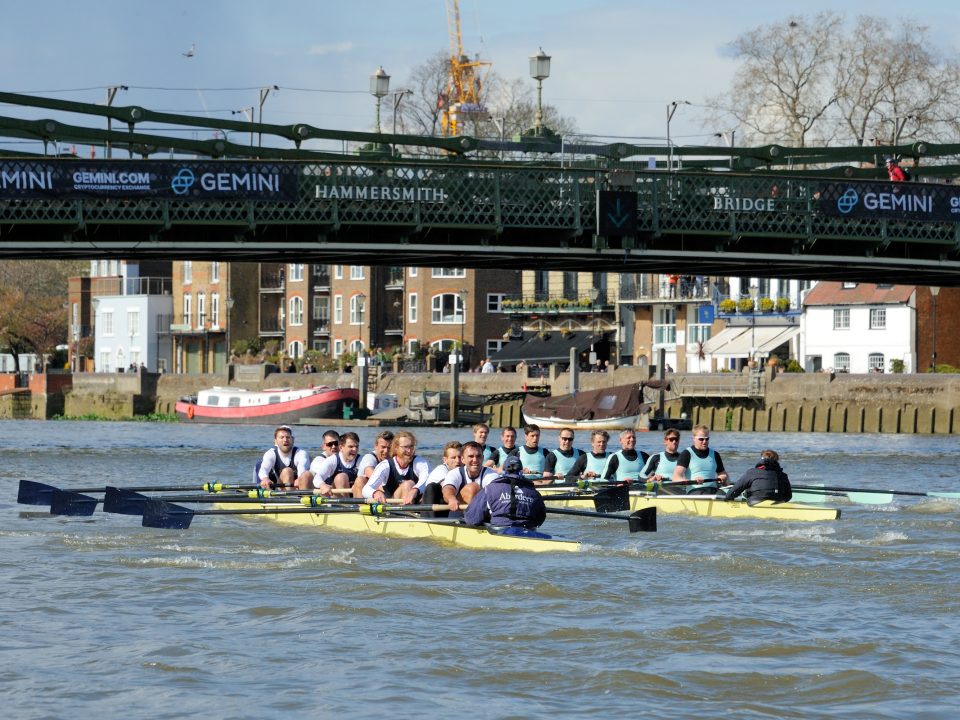 Hallelujah, the women finally have a Veterans Boat Race, and Saturday 2nd April 2022 saw the inaugural event featuring two excellent crews of alumnae rowing from the University Stone to Furnivall Steps in sunny, cold and relatively flat conditions an hour before the men rowed their 26th race.

The normal minimum age of 35 (and average of 42) was suspended for this launch event, though the two crews came in not far off it with average ages of 44 (Oxford) and 39 (Cambridge). Stars in the Cambridge crew included 1996 Olympian and former British Rowing chairman Annamarie Phelps, Sophie Paine from the victorious 2021 Blue Boat and Blues/national team members Pippa Whittaker and Melissa Wilson. Oxford had lightweight Olympian Helen Casey at stroke and double Olympic champion Caryn Davies at 7, with Lebby Eyres, fresh from rowing the Atlantic, at 6. 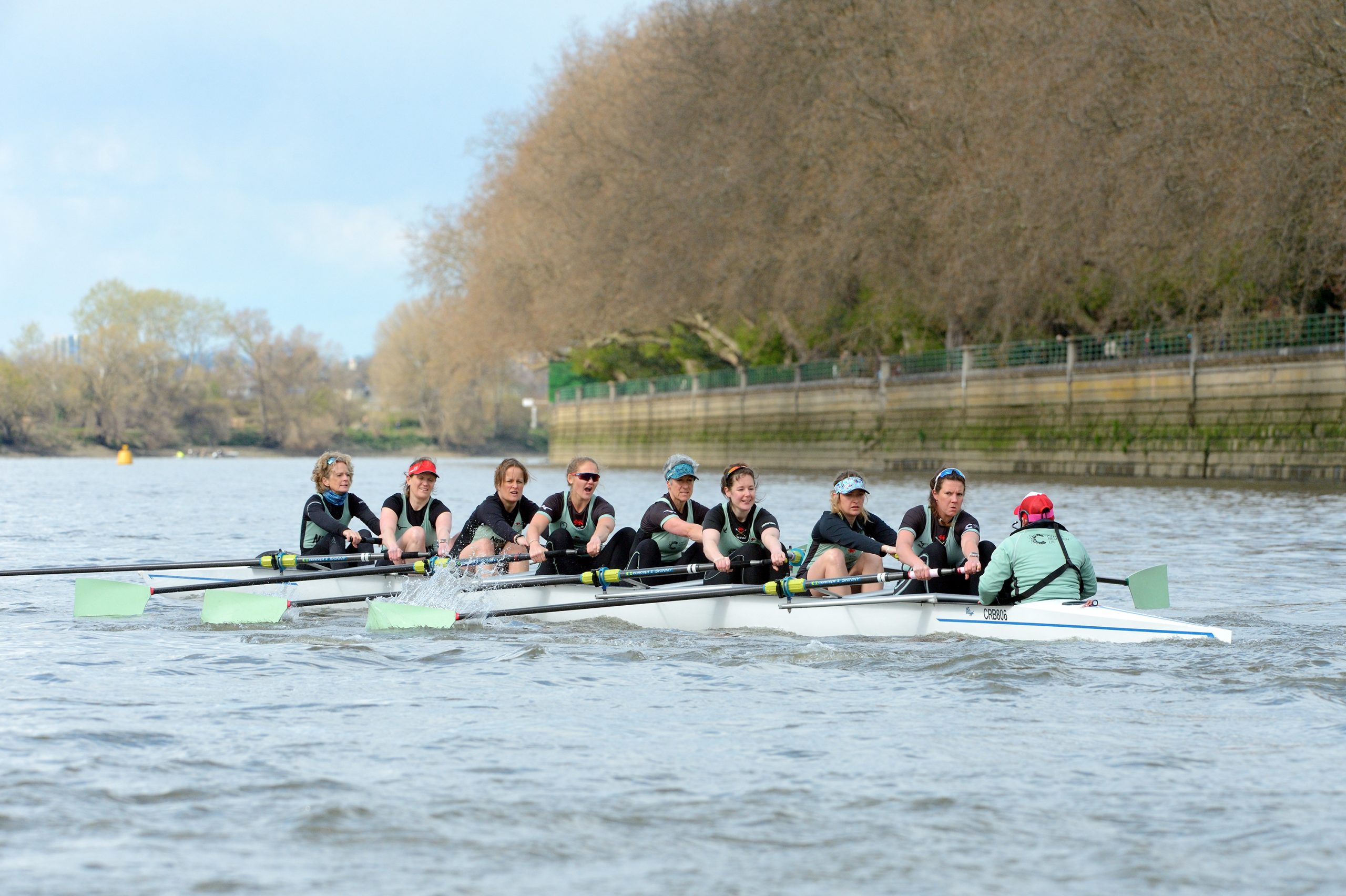 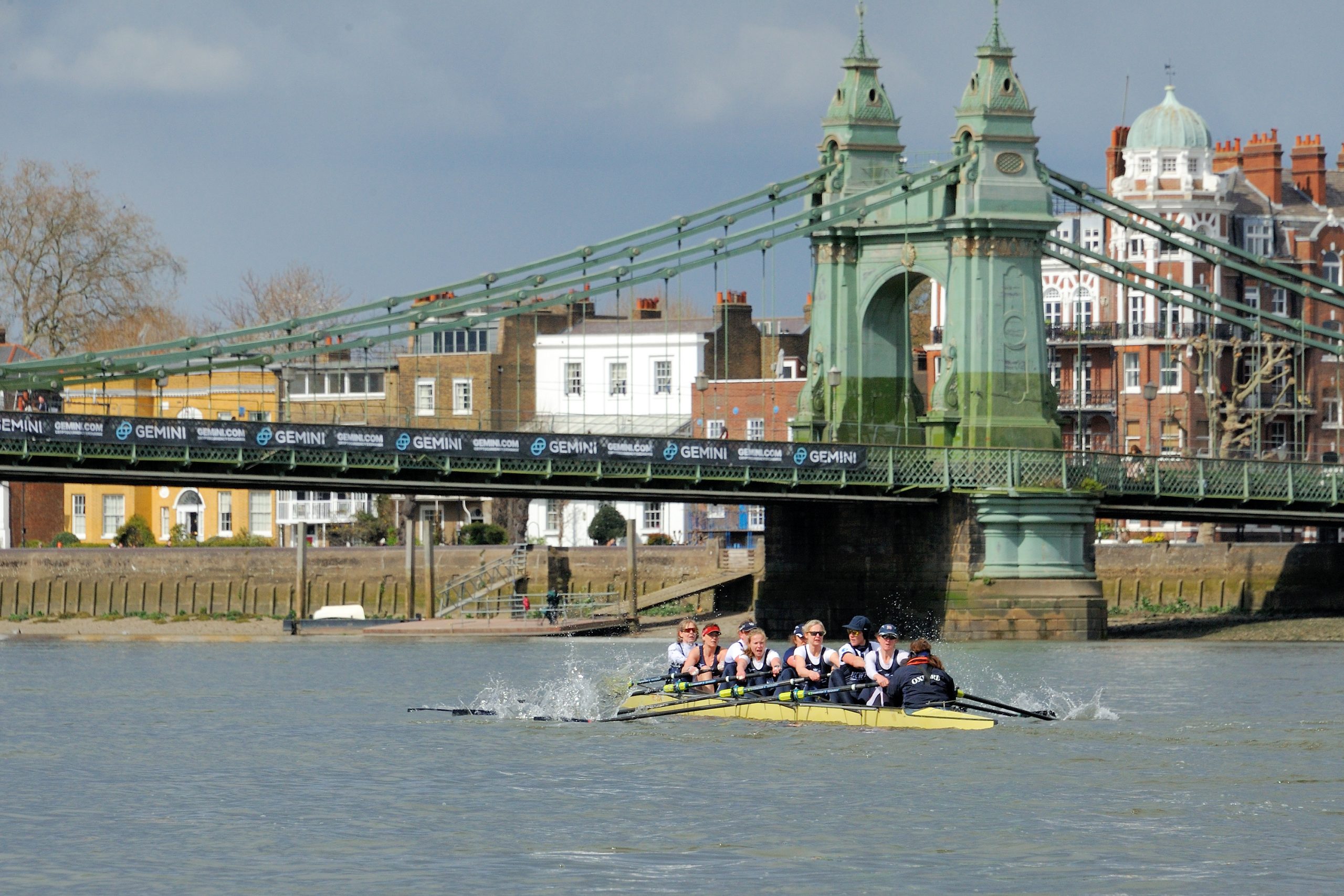 Last year Cambridge won the 25th men's race, held at Ely due to the same COVID and Hammersmith Bridge restrictions which had hit the student races. As a result Oxford were deemed challengers in both coin tosses (the women's done with the 1927 sovereign now used for their Boat Races) but lost them, Cambridge duly choosing Middlesex twice. That was to be the last thing they won on the day, with both races going the Dark Blues' way albeit in very different styles.

The women's race gave umpire Caroline Lytton very little to do, coxes Hugh Spaughton (Cam) and Nicola Walther (Ox) steering smoothly alongside one another with not a single warning. Rating 35-36 off the rolling start they traded early blows, Cambridge slightly sparkier in the first few strokes but Oxford then edging into a slight lead as the two crews settled. Approaching Thames a sustained Oxford push began, which drove them steadily slong the Cambridge shell, but they stuck at two-thirds of a length passing Beverley Brook, both crews rating 33. Around Barn Elms another steady but powerful move began and this time it eroded the remaining Cambridge momentum, inexorably grinding past the Light Blues as they reached Barn Elms and a length and a quarter up by the time they reached the Milepost.

Walther could by this point have moved ahead aggressively to wash Cambridge down, but forebore to do so, and it wasn't needed. Oxford gradually extended their lead with long flowing strokes, Cambridge having a faster finish but slightly less length in the water, and clearly affected by the bounce coming off the Oxford shell. By Hammersmith Bridge Oxford were well clear, and they crossed the line in 8 minutes 29 seconds, with a verdict of 2.75 lengths. 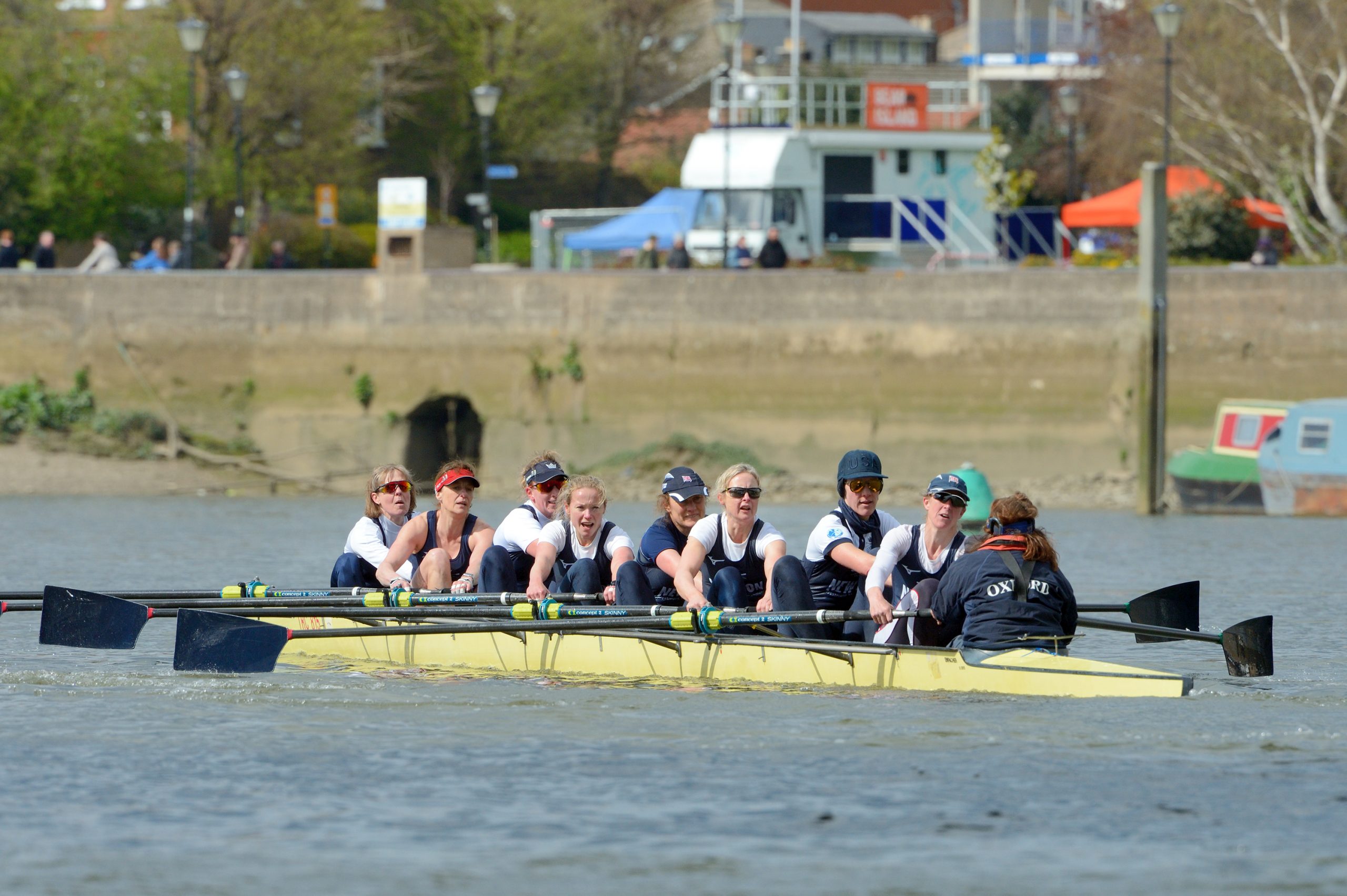 The men's race took place an hour later, fractionally delayed by the Queen's Rowbarge Gloriana which was coming up to Putney from central London under engine power and stopped to watch the race.

This was a well-matched pair of crews with several experienced veteran racing names, including James Cracknell and David Gillard for Cambridge up against Robin Bourne-Taylor, Ante Kusurin, Toby Ayer and Olympic silver medallist Gerritjan Eggenkamp for Oxford. Cambridge also had at six Matthew Parish, another experienced Olympian and veteran oarsman whose sons Ollie and Jasper are stroking the Cambridge men's crew and coxing the Cambridge women's crew respectively. In an extra twist, COVID had taken double Olympic champion Andy Triggs Hodge out of the Oxford lineup a few days earlier, Andrew Brennan stepping in as reserve.

On the non-stakeboat floating start Oxford might have been a foot ahead (at most) but Cambridge quickly put that right by taking a couple of seats straight away. Oxford's racier rhythm looked to pin them back, but Cambridge settled strongly, moving into a 4-seat lead along the Embankment as both crews rated 36. Umpire Sir Matthew Pinsent had been busy from stroke two, and the crews remained closely alongside one another with Pinsent's flag warning both or one more than twenty times inside the first three minutes.

For a while the Light Blues held a 1/3-length advantage, then shortly before they cleared Beverley Brook started to churn through Oxford, sliding past seat after seat while Oxford could not quite establish a solid enough rhythm to respond. By the Milepost Cambridge were about to break contact and looked set to copy the Oxford veteran women, but stuck at a couple of feet clear water. As the Craven Cottage bend ran out and with both crews rating 34-35 a determined Dark Blue push-back began, and despite rowing in wash they clawed back overlap with the Cambridge shell approaching the red buoy near Harrods and started to reduce the Light Blues' lead below 3/4 length. At this stage Pinsent was warning Oxford but as they neared Hammersmith Bridge he began to warn Cambridge continuously, the two coxes battling for the best water and neither giving quarter.

Approaching Hammersmith Bridge the long-threatened disaster struck, Oxford bow Robin Ejsmond-Frey clashing with Cambridge stroke Fred Gill, after which the Oxford bow-ball got stuck under Cambridge's riggers forcing a stoppage. Floating entangled under Hammersmith Bridge the crews eventually started rowing again, Cambridge crossing the line first only to be told by Pinsent that they were disqualified, since he had been warning them (for some time) when the collision happened.

There is a neat historical footnote to this: three rowers in each crew had been in the 2017 Veteran Boat Race which was almost a mirror image of this, Oxford disqualified for fouling after going ahead of Cambridge early on Middlesex but then being rowed down. That was also umpired by Sir Matthew Pinsent.... 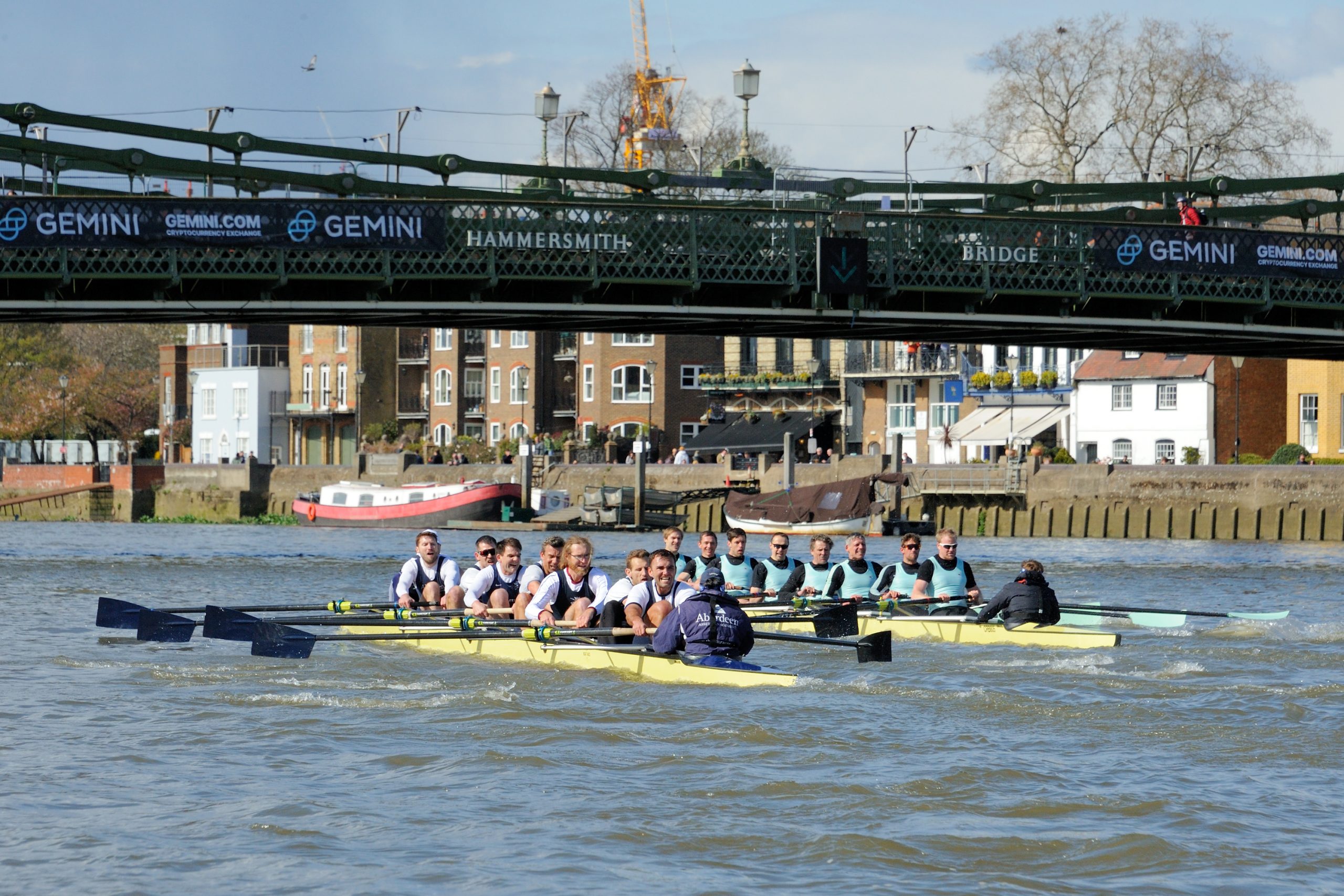 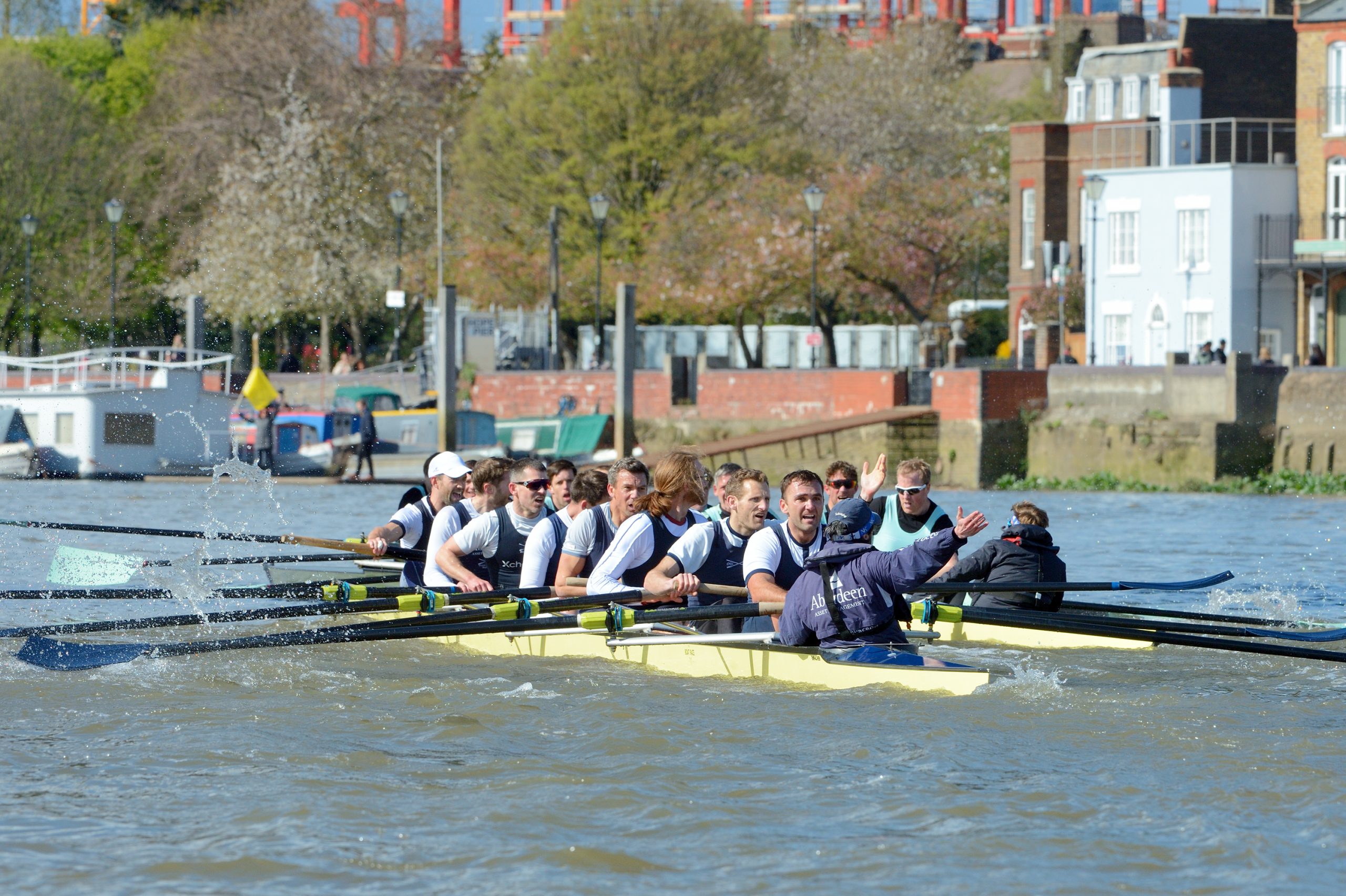