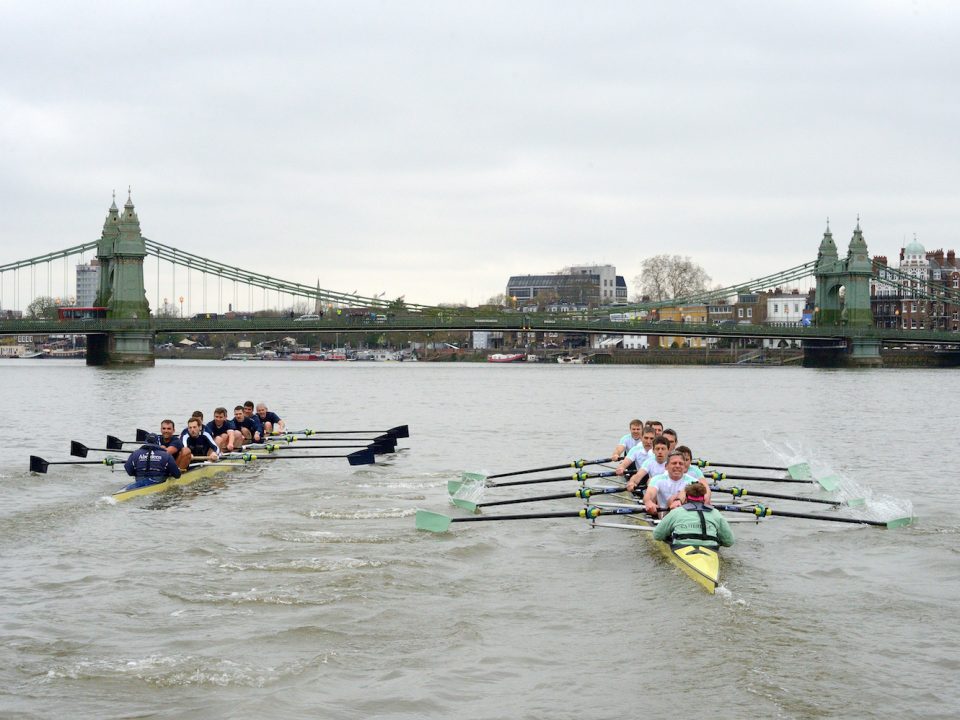 Oxford’s alumni men won the 24th Veterans’ Boat Race in a tightly fought but courteous scrap in which neither crew gave quarter over the 2-mile course from Putney to the Furnivall Steps just past Hammersmith Bridge. Oxford had won the toss and chose Surrey for the second-bend advantage, hoping to play to their strength and stamina in the second half. They were the younger crew by an average 7 years, and also half a stone heavier, but the pedigree of both was considerable, boasting a wide range of Blues and no fewer than seven Olympians between the two clubs.

Under glowering grey skies and with the BBC helicopter hovering noisily overhead (the event is used as the BBC technical test, complete with imaginative practice commentary from Andrew Cotter and Zoe de Toledo) the crews slid through Putney Bridge and after a few taps managed a well-judged floating start, getting away cleanly first time with both crews rating above 45 for the first few strokes. Cambridge’s rate-lift was fractionally feistier, the Light Blues taking the first slight but visible lead as they built towards their stride, but Dark Blue stroke Ante Kusurin chose to keep the Oxford rate high for the next twenty strokes and it paid dividends, nailing Cambridge back and then pulling out first a canvas and then two seats’ lead.

Both crews settled to rates in the mid-30s as they raced along the moored boats at Putney, cheered on by a respectably large crowd of supporters. Meanwhile umpire Judith Packer started to warn Cambridge, Light Blue cox Ed Bosson keen to take full advantage of the first Middlesex corner in his favour. Oxford at 35-36 continued to draw out steadily past their rivals: half a length ahead at Thames Rowing Club and two-thirds of a length at Beverley Brook with Cambridge dropping to 34.

As they neared Barn Elms Cambridge began to push back into contention, and now the umpire’s flag was warning both crews equally. This and the head wind they hit coming to the corner of Fulham Football Ground cost Oxford dearly, they stumbled, lost some of their rhythm and the more composed Light Blues seized their chance with glee. A single brief clash between the Oxford 7 and Cambridge 6 just past the corner barely unsettled these experienced crews, and as they swept past the Milepost the crews were virtually level.

So here we were: reset and start again. From the Milepost it was effectively a new sprint to the finish and Oxford, regaining their lost rhythm, rapidly took advantage once more. For half a minute the two crews rowed in sync at 34.5, but Oxford was inching their bows ahead with every stroke (and being regularly warned) until they had half a length at the first set of riverside flats, and seven seats by the time they reached the autumnally-coloured Harrods Depository.

Cambridge dug in to stop the rot with Hammersmith Bridge rapidly approaching, stroke Matt Parish leading push after push, but despite Oxford being the focus of the umpire’s attentions again, the Dark Blues held the upper hand and did not need to lift their cadence to the finish, much to the disappointment of crew coordinator Jonny Searle, who was gesturing for them to sprint harder from the following launch. The two crews swept past the dead tree opposite Furnivall safely on their own stations (which doesn’t always happen) and still in contact. The margin, being a few feet short of clear water, was adjudged 7/8 of a length to Oxford, but was a credit to two spirited and determined crews.

Oxford 2-seat Adam Pearson found redemption in the win, 25 years after having been pulled unceremoniously from the Dark Blue crew due to a heart infection two weeks before his planned appearance in the famous race. Tomorrow his son Charlie races for glory in the Oxford blue boat, thought to be an unprecedented example of father and son rowing for victory against Cambridge on the Tideway in the same weekend.

Report: Rachel Quarrell, rowing correspondent for the Telegraph and for Row360 magazine
Timekeeper and finish judge for The Veterans’ Boat Race