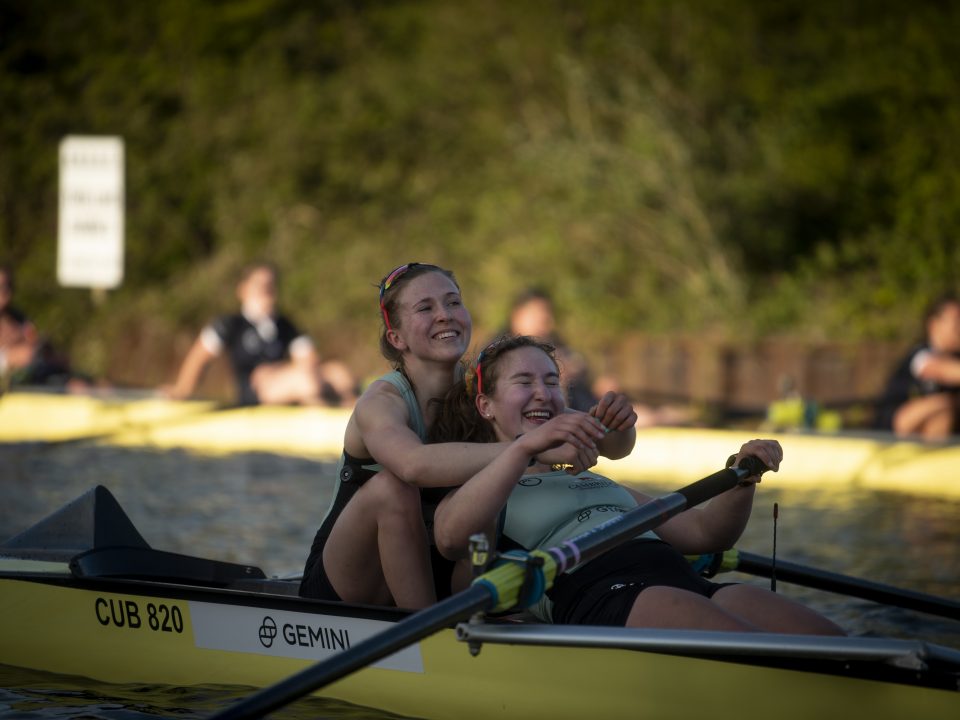 Conditions were bright and breezy on the River Great Ouse for the Oxford and Cambridge Reserve Races, which were held in line with government and British Rowing guidelines on Sunday, 25 April 2021.  The event saw the 56th Men’s Reserve Race between Isis & Goldie, the 49th Osiris v Blondie Race, and the Men’s and Women’s Spare Pairs.

The Oxford University crews travelled up for the day and arrived early for a practice session in the morning. Osiris and Goldie won the respective tosses, with both crews choosing the road-side station, hoping to benefit from the increased wind-shelter it offered.

The Men’s Reserve Race start was delayed by 15 minutes to 17:15, as a broken-down cruiser was removed from the course. Umpire Tony Reynolds worked hard to keep the crews level at the start line, with the cross-wind blowing both across the river.  A messy start from Isis saw them warned immediately, clashing with Goldie and leaving them a length down in the first 200m. Isis relaxed, holding Goldie at a length and a half as cox Olly Perry moved behind Goldie to take advantage of the wind shelter. However, at 2000m Goldie found their second wind, and a powerful rhythm from stroke Hugo Durward saw them walk smoothly away, finishing 6L ahead of their rivals in a time of 16 minutes 10 seconds. It was a dominant row from the Cambridge reserves, not once allowing Isis overlap on the 5 km course.

The Women’s Reserve Race took place at 18:15 and again aligning the crews in the strong wind proved challenging. Umpire Matt Smith called the start quickly, with both crews aggressively attacking the start.  Blondie had the more impressive start, taking a 1L lead by 500m. Several warnings ensued as Blondie cox Angela Harper moved towards the centre of the river, seeing shelter from the rough water. As with the men’s race previously, the Cambridge reserves out-classed their opposition, drawing further away with every stroke to finish 7 lengths ahead in a time of 19 minutes 6 seconds.

In the women’s Spare Pair’s race at 15:00, very rough conditions saw the Oxford duo of Isobel Stuart-Smith and Rhiannon Heard take a crab and capsize, leaving the Cambridge pair of Debs Oakley and Vera Kunz to row over the course for the win. The men’s Pairs saw a neat and tidy duo from Oxford of Jan Ole Ernst and Holden Eaton walk away over the 2km course, finishing several lengths ahead of Cambridge’s Luca Ferraro and Konstantinos Voudouris.