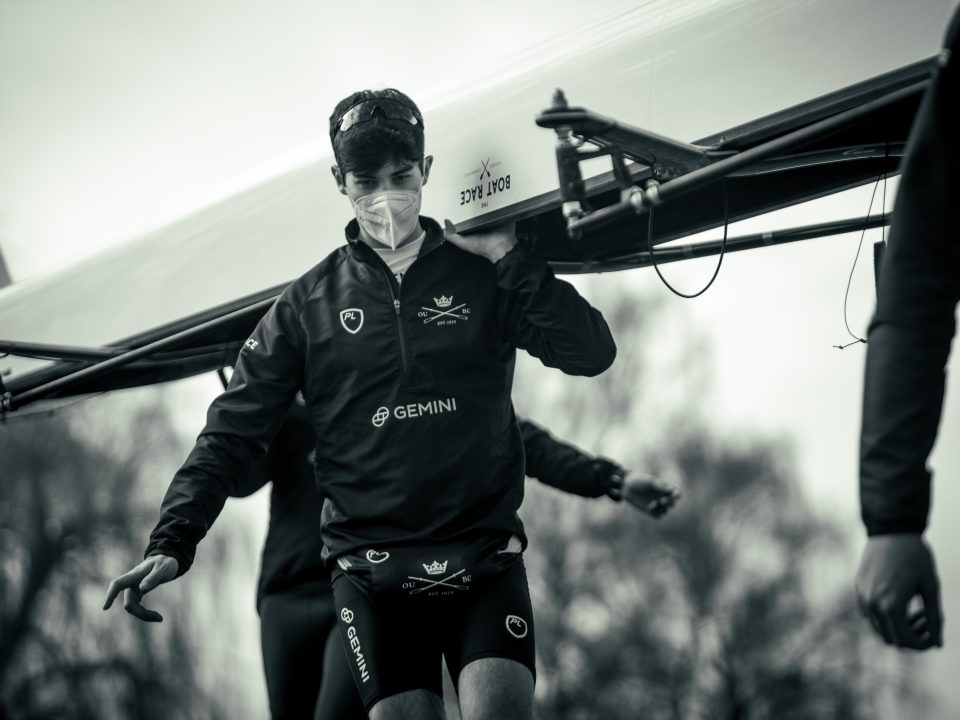 Thoughts and reflections from both sides of The Gemini Boat Race

With less than two weeks until Cambridge and Oxford meet at Ely for the 2021 Gemini Boat Race, the student-rowers reflect on the most unusual of Boat Race campaigns and the challenges they’ve faced along the way.

Looking to keep the Dark Blue women in the fight during the 75th Women’s Boat Race is Oxford cox, Costi Levy. She committed to another Boat Race campaign after the 2020 cancellation. As a former cox at both St Paul’s Girls’ School and Tideway Scullers it was disappointing for Costi not to put her Tideway prowess to use last year, but the student playwright and theatre director will hope to deliver her lines with great effect down the new course at Ely. The crowd will be lacking but the spirit remains and Costi thrives on the high-performance environment at Oxford. On the motivation within the team, she says: “Everyone is here to pull hard and get faster, with the aim of beating Cambridge. The people on the squad are what make the team so special”.

A new face on Costi’s team is Canadian rower Julia Lindsay. After a last-minute application to study at Oxford, Julia’s arrival was delayed owing to a battery of visa applications, quarantines, and lockdowns. As a result, she has spent a mere four-and-half-weeks rowing with her Oxford crewmates. She admits it has been harder to build a community than in the past but focuses on the silver linings to ensure she stays positive. Julia was in Canada when she received news that the team could return to the water during lockdown 3: “It was stressful to hurry back to Oxford as quickly as possible, take about a million Covid-19 tests and finish my quarantine so I could join selection”. Curtailing the on-water preparation ahead of April 4th is a challenge faced by all the athletes, but they have previously experienced the quick transition from ergo to boat in December. Julia says: “Trial VIIIs week was really fun, especially for me, because it was my first time meeting the squad in person”.

President of the Cambridge women, Sophie Paine, has made a concerted effort to keep the motivation high among her teammates. This was particularly useful throughout the long and lonely land training the women endured during lockdowns. When restrictions allowed, the women cycled together and met for socially distanced walks – maintaining the squad’s mental wellbeing underpinned their collective competitive focus. It was important for Sophie and her teammates to “feel connected to each other” to build a strong team spirit and generate trust among the Light Blue squad. Sophie recalls: “Oftentimes, it’s the little things that help, like sharing baked goods”.

The effort to generate a positive group dynamic in the Light Blue camp has certainly proved effective for psychology graduate Caoimhe Dempsey: “I’ve never been around such a driven, energetic, optimistic and competitive group. It makes me happy to get up every day and I am proud to be part of the Cambridge women’s team”.

Cambridge Blue, Rebecca Dell, echoes the sentiments of her Irish teammate: “This is my fourth year on the team, and I can say without a doubt that the team culture this year is the strongest it has ever been. The adversities we have faced as individuals and as a team have meant that we have learnt to be more open and honest with one another, and we are all now incredibly close”.

For the Dark Blue men, this year was about redeeming a lost opportunity following last year’s cancellation. A perspective especially true for Felix Drinkall. Despite a strong international record with the Great Britain development squad, victory in the Boat Race has eluded Felix. After defeat in the 2019 Boat Race for which he led his crew as President, Felix ended the year as an U23 world champion after stroking the British eight to gold. Confident the 2020 Boat Race would yield his first Boat Race win, he was gutted to learn of its cancellation. Felix recalls: “When we were told that the Boat Race was cancelled it certainly took the wind out of our sails. I needed some time. I did not even think about training for a couple of weeks”. But the former Oxford President remains steadfast in his pursuit of Boat Race glory. He hopes to emulate the 1944 Oxford crew and defeat Cambridge on their home water.

Callum Sullivan, the President of the Cambridge men, and his Light Blue colleagues stand against Oxford’s desire to paint the Great River Ouse Dark Blue. They aim to level the Ely scorecard. Callum and Felix have a shared history both as rivals and teammates. They competed against each other on the Tideway in the 2019 Boat Race when Callum sat at five in the winning Cambridge crew but found themselves pulling together as teammates later that year in the U23 world championships, with Callum in the three seat of the British eight.

The former Dartford Grammar School student who learnt his rowing at Globe Rowing Club has been keen to make the most of each session at Ely: “Naturally in any season you have moments of plateauing. But this time, we made sure we were really focused and clear for each session. This race is coming, and it is real. We are down at Ely and the guys are highly motivated. We are going full steam ahead to be ready to beat Oxford”.

This year’s rivalry will be no less fierce, and no less dramatic. Despite Ely’s straight course there have been plenty of twists and turns for the athletes to navigate. As they close in on their attempt to win the Gemini Boat Race on April 4th the four crews from the two universities have one shot to get it right.

Tom Ransley is a British Olympic gold and bronze medallist rower from the Rio 2016 and London 2012 Olympic Games. Before joining the GB Olympic team, Tom studied at Cambridge University and competed in two Boat Races for the Light Blues, where he suffered two gruelling defeats. Tom knows the race, and its challenges, inside out. Tom retired from the GB team in April 2020. He became Deputy Editor of Row360 in February 2021.