OXFORD & CAMBRIDGE ANNOUNCE CREWS TO COMPETE IN THE BOAT RACE 2019 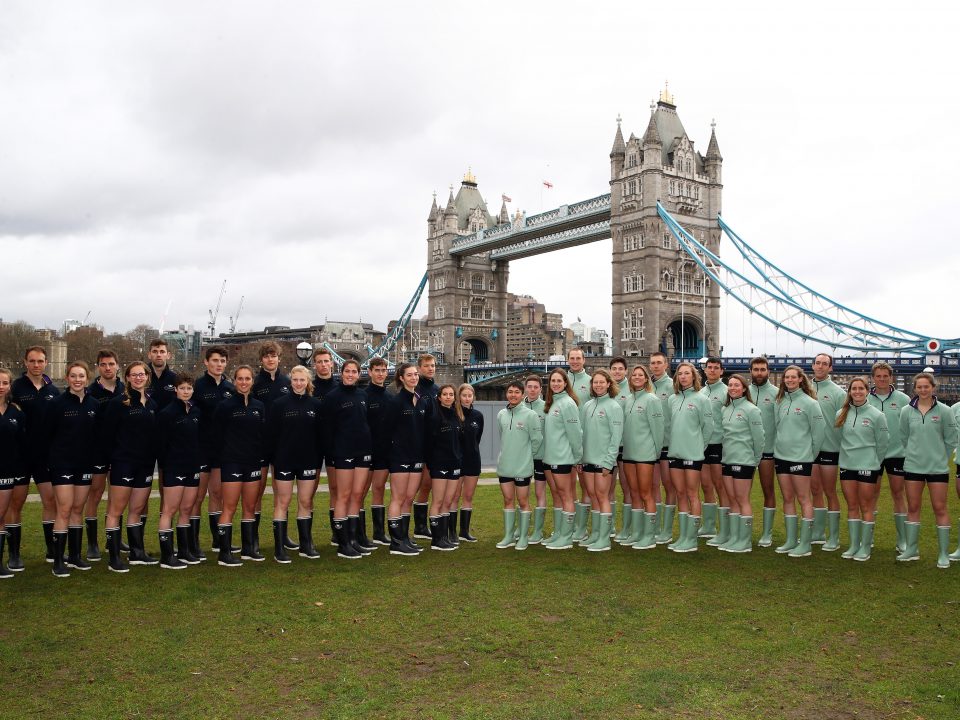 With several former Blues and notable new additions for both Races, which will take place on Sunday 7th April, this year looks set to be another world-class event, showcasing the very best collegiate athletes in the world’s best-known Varsity match.

On the women’s side, Oxford’s crew features several returners from previous Boat Race campaigns including Beth Bridgman and Renée Koolschijn both raced in the 2018 crew and President Eleanor Shearer raced in the 2017 Blue Boat. Liv Pryer, Anna Murgatroyd and Issy Dodds will all be making Blue Boat debuts after previously racing for Osiris, the Oxford Women’s reserve crew. A predominantly British boat, there are only 2 overseas athletes. Renée Koolschijn from Holland and German Italian Tina Christmann who has represented Germany at four World Championships and won two medals.

For Cambridge, there is only one returning Blue in the crew this year – Tricia Smith. Larkin Sayre and Laura Foster have both been selected for the Blue Boat after rowing in Blondie, the Cambridge Women’s reserve crew, in 2018. An international crew, Ida Gørtz Jacobsen will be the first Danish athlete to compete in The Women’s Boat Race since it moved to the Tideway in 2015. Ida competed at the 2018 World Rowing Championships where she finished 4th in the Danish Women’s four. Within the crew are 3 Yale alumni Lily Lindsay, Kate Horvat and Sophie Deans who were part of the Yale crew that won the team points title at the Ivy League Championship and finished eighth at the NCAA Championship in 2018.

Once again, Cambridge are the heavier of the two women’s crews, tipping the scales at an average of 72.3kg per woman compared to Oxford at 71.1kg. The height difference is around 2cm per athlete, with average height of Cambridge at 179cm per woman and Oxford at 177cm. The average age for both crews is 23.

Oxford University Men’s Boat Club, winners in four of the last six Boat Race encounters, name a crew with two returning Blues. President Felix Drinkall, first undergraduate President of Oxford since Constantine Louloudis in 2015, and Benedict Aldous both raced in last year’s losing crew. In a predominantly British boat, German and Harvard Alumnae Achim Harzheim makes the step up from Isis to the Blue Boat, while Belgian Augustin Wambersie will be the first Belgian national to row in a Blue boat for 156 years.

Cambridge name a strong crew, with 2 returners from last year’s crew including President Dara Alizadeh and Freddie Davidson. Dave Bell steps up to the Blue Boat after being in Goldie last year. Pole Natan Wegrzycki-Szymczyk is the tallest athlete this year at 203cm and competed at Rio 2016 finishing 7th in the Single Scull. 6-time World Champion and 2-time Olympic Champion James Cracknell will be in the 2 seat. At the age of 46, Cracknell will become the oldest Blue. The previous oldest Boat Race competitor was Andy Probert who was 38 when he coxed the Cambridge boat in 1992. Mike Wherley was 36 when he rowed for Oxford in 2008.

The 165th Men’s Boat Race will see Oxford, weighing in at 90.0kg per man, start as the heavier of the two men’s crews, with Cambridge weighing in at 89.8kg per man. The average height per man for both crews is 194cm and the average age of the Oxford crew is 22 and for Cambridge is 26 years old.