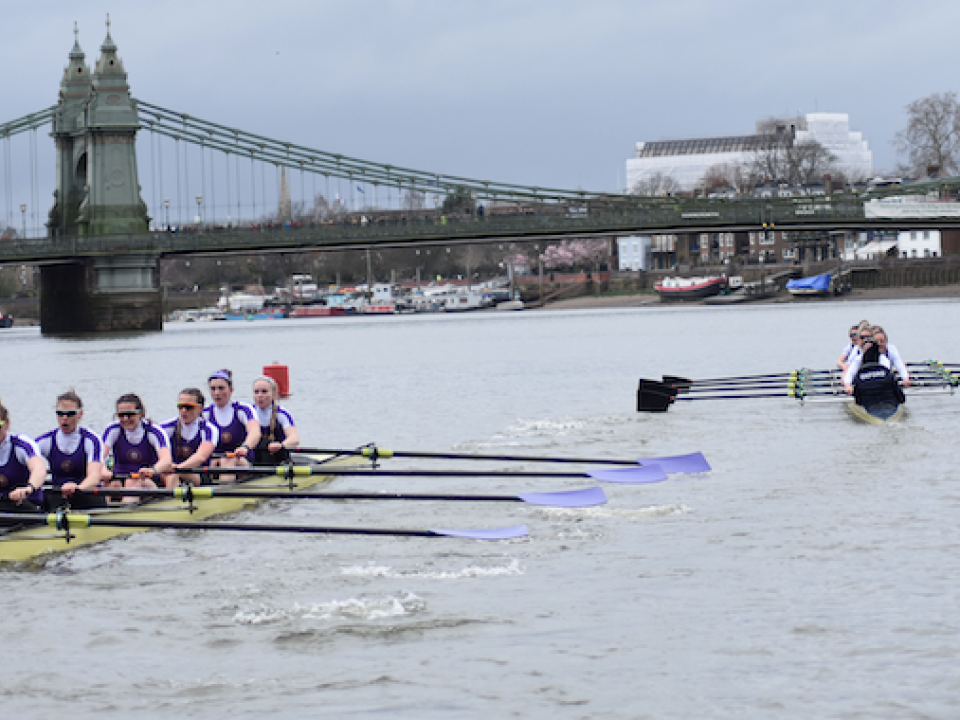 In the last official fixture of the season, Oxford University Women’s Boat Club took on the University of London yesterday.

To avoid any unnecessary contact between the crews, Umpire Judith Packer carried out the coin toss and briefing virtually during which UL won and chose to race on the Surrey station. Similar to other fixtures in recent weeks, a late-turning tide forced a review of the start times of the fixtures, but the race got underway just a few minutes after the originally scheduled time.

Judith Packer marshalled the crews through the Putney bridges and after a quick alignment from the side, the red flag was dropped to start the fixture. Both were warned reasonably early in the race to keep them apart, but that was one of the few times that the Umpire needed to use her white flag during the race.

Oxford took the early lead, with ½ length lead at the Town Buoy, extending out to a full length by Fulham Football Club. At the milepost, the Oxford Women had extended their lead to a length of clear water between themselves and the UL crew, which they would maintain for the majority of the piece, despite UL having the advantage of the long Hammersmith bend.

There was still over a length of clear water as the crews passed under Hammersmith Bridge where UL received lots of cheers from the local supporters on the bridge. As the crews approached St Paul’s it was clear there was no longer any assistance from a weak tide and UL cut the Surrey corner very tight gaining ground on Oxford as a result. Oxford encouraged by their coach covered this move while remaining on the fairway. As Chiswick Eyot came into sight, the UL crew were being heavily urged on by their Coaches in the following launch and in an attempt to cut the bend as tight as possible, rowed inside the red navigation buoy off the course towards the Surrey bank, and had to be steered back onto the course by the Umpire. Oxford continued to lead, but cutting the corner had earned UL a substantial advantage as Oxford were now rowing against the stream.

The piece was planned to finish at Chiswick Steps and at the steps Oxford had maintained a narrow lead, however the Umpire didn’t call the race down and both crews continued for few more strokes winding down at different times.

This led to some confusion as to the finish margin, but at Chiswick Steps Oxford were just under ½ length in front.