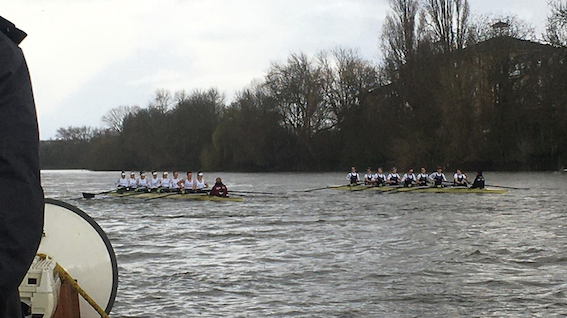 After the unfortunate cancellation of Women’s Head of The River, on Sunday 8th March, the PLA Ebb Tide Flag Warning was updated from red to yellow which meant the Oxford University Women’s Boat Club fixture could go ahead. This fixture saw Oxford University Women’s Boat Club face off against the Nereus 1st eight, who have all won medals at U23 level including 4 athletes from the 2019 U23 World Champion Eight.

Despite the rainy conditions and the fast flow of the Thames the crews boated from Imperial College Boathouse and headed upriver for the first of three pieces.

The first piece was a 3-minute piece starting at Chiswick Steps and finishing just before Hammersmith Bridge. Oxford on the Surrey Bank and Nereus taking their place at the Middlesex Bank; this therefore gave the turn advantage to Oxford. As the piece started it was Nereus who were quicker off the mark and established an early lead. However, this was short lived as the Oxford crew used the turn to their advantage to mount an attack for the lead. This caused Oxford to become warned by the umpire multiple times and ended with a minor blade clash between the two crews. The outcome of the first piece, a win for Oxford by 1 boat length.

The second piece, from Chiswick Steps to the Mile Post, covered greater distance by the crews and therefore requiring tactics and good pacing. Oxford were given the Surrey Bank with Nereus sat at Middlesex. Yet again soon after the start and a close call of crews moving closer together; Nereus took an early lead off the start before being reeled in by Oxford. Nereus were still the leaders as the crews entered the first turn. Oxford used the advantage bend and a big push to gain on the Dutch team. Oxford then proceeded to sit roughly quarter length in front where that distance remained for the duration of the middle section of the race. As the final turn emerged and Hammersmith Bridge came into view Oxford put in another push to leave Nereus in dirty water from their blades and confirm their second win of the day by ¼ length of open water.

The crews remained on the same sides of the river for the third and final piece but for the first time in the fixture, the course was in the favour of Nereus. Racing from Hammersmith Bridge to Putney boathouses, the piece began with a rolling start that was marred by a misunderstanding which meant that the crews didn’t start at the same time. The bulk of the advantage to Nereus was taken early because they went first. Oxford fought back strongly after the early disadvantage, making ground on the outside of the Fulham bend and had regained a canvas overlap by the Town Buoy, where the race ended.

A good day of racing with 3 weeks still to go until The Women’s Boat Race on Sunday 29th March. Commenting on the fixture, Coach Nelder said: “Our thanks to Nereus for coming to race us. It was a highly competitive weekend of training and racing. It would be very challenging to prepare properly for the Boat Race without these private fixtures and we are enormously grateful to all the people who worked hard to make this weekend a success. The club is now looking forward to the final fixture on 15th March, when Oxford and Osiris will race crews from University of London.”