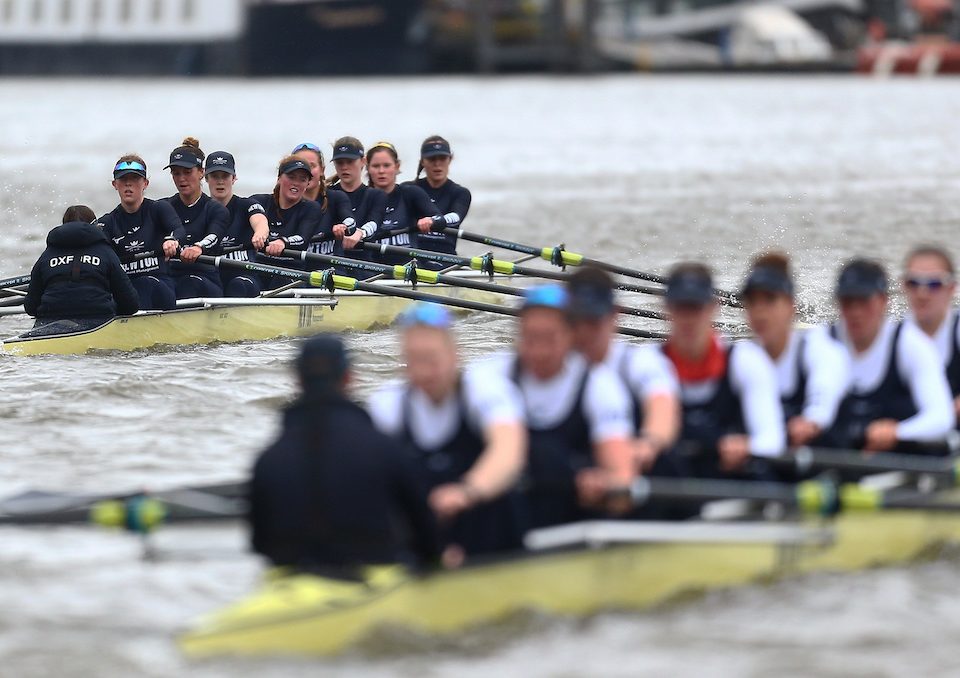 It was Comet, racing in blue who seized the early advantage, leading Blitzen, in white by ¾ of a Length by the end of the Putney Embankment. This dominant start in the preliminary stages of the race defined what would unfold over the rest of the course. With the first bend round Craven Cottage in favour of Comet, they moved out to a length over Blitzen and had clear water by Fulham Reach. By the time the crews had raced under Hammersmith Bridge, Comet, now out to a two length lead, could move in front of their opponents and take full control of the river.

As both boats rowed past St Paul’s and onto Chiswick Eyot, conditions deteriorated and the bladework of the Dark Blue women was tested. It was clear both of the crews felt the impact of the poor water but they maintained their strong rhythms passing the bandstand as the water flattened out once more. Despite Blitzen’s attempts to stage a comeback, they were not able to reduce Comet’s two length lead. Comet appeared to stay on top of the conditions better than their clubmates as they watched on able to see off any challenge from Blitzen. After Barnes Bridge, victory was never in doubt as they moved out to three lengths. They held this margin until the finish, just before Chiswick Bridge.

The first of four Trial Eights races was relatively uneventful as fixtures on the Tideway go. Comet’s early lead resulted in very few occasion for Umpire, Richard Phelps to step in and warn crews for their steering.