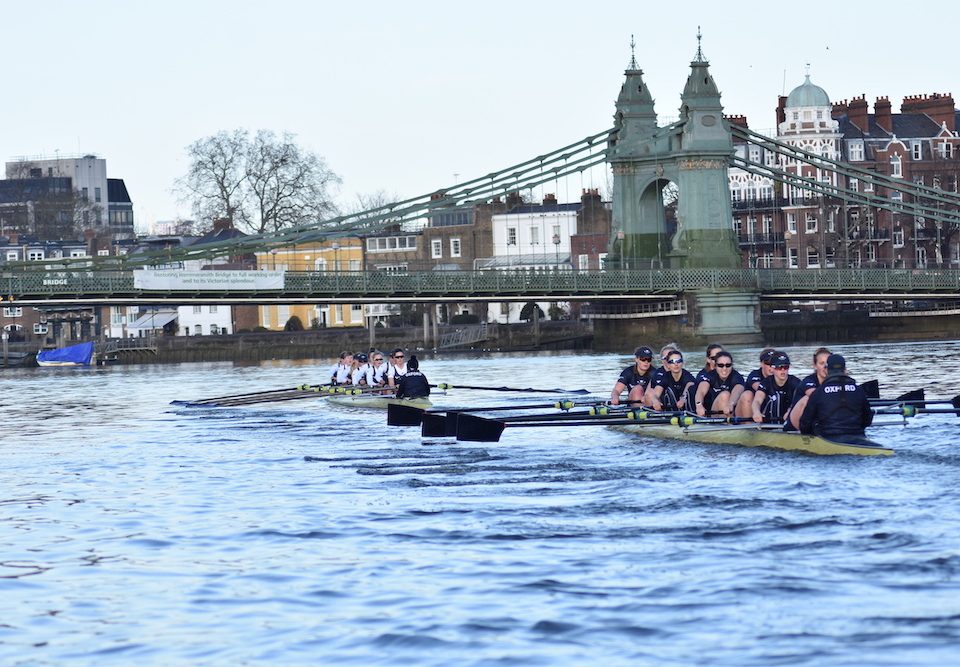 OUWBC raced Trial Eights as part of their preparation for The Boat Race in March. This year’s eights, with the given names of Morely and Brown, raced at 11:00 on Wednesday 11th December. Morely, dressed in white, won by three boat-lengths open over Brown, dressed in dark blue.

Conditions were relatively tame with scattered clouds, calm waters and temperatures ranging from 5 to 7 degrees.

The boat names were chosen in celebration of The 75th Women’s Boat Race. The boats were named after Brown (stroke) and Morely (bow) of the first Oxford Women’s Boat in 1927.

Umpired by Judith Packer – 2020 Women’s Boat Race umpire, the crews were even off the start and for the duration of the first minute. As the crews settled into their base, Morely steadily moved out in front.

Approaching Hammersmith Bridge, Morely attempted to move in front of Brown. Despite warnings from the umpire, Morely’s open water lead allowed the crew to put Brown in their puddles.

At six minutes in, Morely was up two lengths over Brown. At Barnes, Morely had a lead of 7.4 seconds which they held onto for the remainder of the race and finished 6.25 seconds ahead of Brown.

Trial Eights will have provided coaches with a great opportunity to observe how athletes fair on the Championship Course. The official Blue Boats will be announced in March 2020 ahead of The Women’s Boat Race on Sunday March 29, 2020.