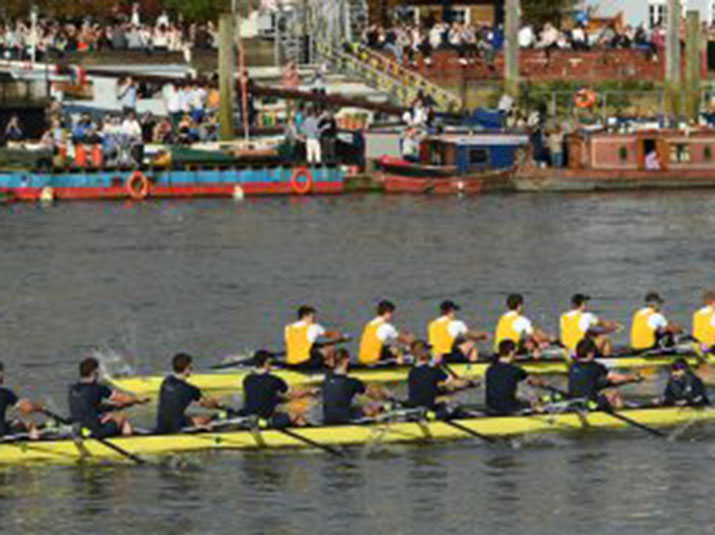 It was an unusually warm and pleasant spring day with a light west-south westerly breeze which combined with a spring tide made for relatively fast conditions. This resulted in a slight head breeze off the start, flat conditions from Barn Elms to Hammersmith Bridge before hitting the slight headwind from St Paul’s School and along Chiswick Eyot. This was not enough to cause any serious chop on the water and conditions were on the whole very good for racing.

Goldie arrived 1mn 25secs late for the start and were given an official warning from race umpire Judith Packer. The crews got away cleanly from the start, with Goldie making the better of the initial stokes hitting 43 strokes per minute vs. Isis on 44, and by the time the crews reached Crabtree boathouse Goldie had taken a slight lead. At this point Goldie were striking 40, Isis 39. Approaching the black buoy Goldie were warned as they looked to position themselves for the upcoming Middlesex bend which was to their favour. The crews had now settled to 36 and Goldie were able to eek out another few seats to lead by approximately 3 seats just past Barn Elms, not without further warnings from the umpire to both crews to stay apart as they navigated the bend.

Approaching the mile post Isis looked to have settled into the slightly stronger rhythm of the two crews, striking 34 to Goldie’s 35 and it was clear they were beginning to move back through Goldie, with Isis trailing by a canvas or so at the mile post. Isis continued to move well and at Thames Wharf had taken the lead by a few seats. With the long Surrey bend approaching this would be the critical juncture of the race for both crews and Isis looked to capitalize, taking full advantage of the first part of the bend to reach a half a length lead by Harrods. Isis were warned several times between Harrods and Hammersmith not to encroach into Goldie’s water, but by Hammersmith had now reached a lead of one length. Goldie, knowing they had to respond, continued to rate 35 and were fighting hard to keep in contact with Isis on the outside of the bend.

Shooting Hammersmith Bridge, both crews hit the brunt of what breeze there was and Isis continued to move away from Goldie. By this stage Isis had just opened up clear water and passing St Paul’s Goldie edged over to Isis’ station looking for the faster racing line on the inside of the bend. This caused the umpire to warn Goldie twice to return to their station, with just half a length or so of clear water between the crews. Isis however continued to have the slightly higher boat speed and with the benefit of seeing Goldie behind them and clean water ahead were able to lengthen out to what remained an effective 33 strokes per minute.

At Chiswick steps Isis held a 2 length lead over Goldie, who continued to battle hard with the knowledge that if they could get back on terms then the final bend was in their favour. Both crews pushed hard down past the bandstand as conditions flattened out again with Goldie maintaining their rate at 35, Isis on 33. By this stage the crews were line astern with sufficient gap between them that warranted no further warnings from the umpire for the remainder of the race.

Shooting Barnes Bridge Isis had extended their lead to 2 ½ lengths and continued to look relatively comfortable, maintaining their rate at 33. To their credit Goldie never capitulated and continued to press Isis. Approaching the finish Isis pushed for the line, taking their rate up to 35 and finished the race in a time of 17:17, 8 seconds or 2 ½ lengths ahead of Goldie in what was a good clean race with Isis’ base pace just having the edge over Goldie.