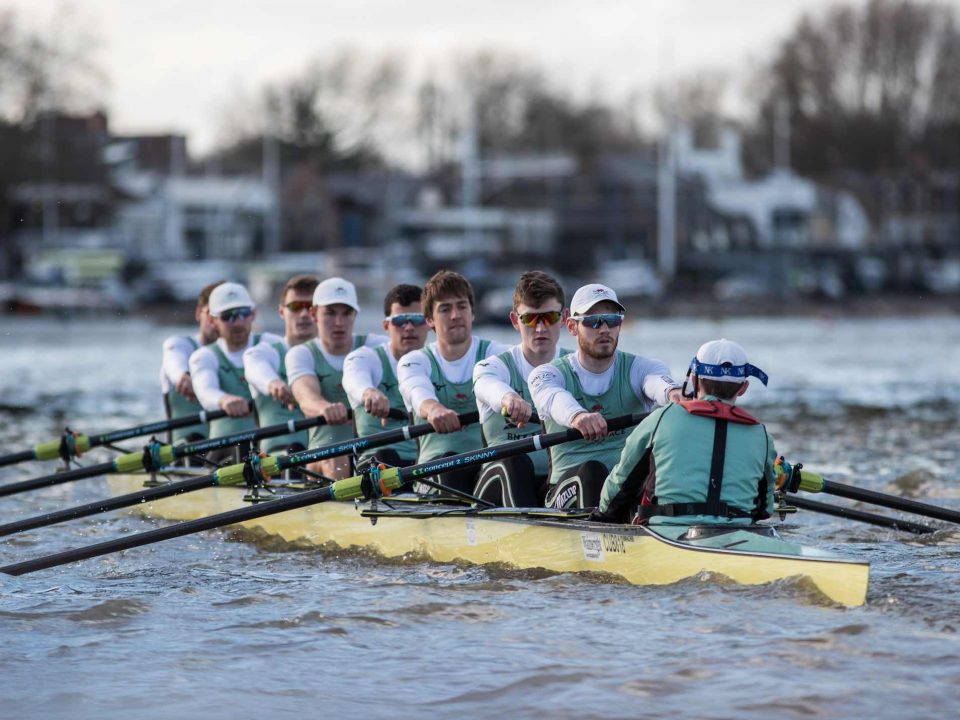 Oxford Brookes had raced Oxford University the previous weekend and therefore the results of this fixture were expected to be of huge interest to the coaches and followers of The Men’s Boat Race. The fixture lived up to expectations with close racing and plenty of drama during the two pieces over the Championship Course.

The fixture was umpired by Sarah Winckless who will take charge of The Men’s Boat Race on the 29th March 2020. At the end of the briefing, Oxford Brookes won the coin toss and chose to race on the Surrey station.

The first piece started from the University Stone in Putney where the Cambridge crew will line up at 16:44 on 29 March. They were aligned by Brookes Head Coach Henry Bailhache-Webb before being set off by Umpire Winckless. It was clear from the word ‘Go’ that Sarah would be kept busy during this fixture.

By the time the crews reached the Town Buoy, both crews had received several warnings, and there had been multiple blade clashes. Brookes had come out of the clashes better off and taken a 1/3 length lead. Cambridge closed this gap by Fulham Football Club and were starting to draw level with Umpire Winckless ordering both crews to hold their lines. Following another blade clash just before the Milepost, Brookes took advantage again taking ½ length lead which they extended to clear water by Hammersmith Bridge and continued to move away to a 2-length margin when the first piece ended at Chiswick Steps.

In between the two pieces, the Coaches and Umpire Winckless assessed the unusual tidal conditions and agreed to proceed with the second piece with the two crews remaining on their same stations. CUBC President Freddie Davidson, who was sat in the stroke seat used the opportunity of the break in between pieces to give some words of encouragement to his crewmates for the second piece.

The crews spun round to start the second piece at Chiswick Steps and it was apparent that Davidson’s words had paid off as Cambridge went off the start much more aggressively. Brookes intrusive steering earned them multiple stern warnings from the Umpire whilst they maintained ½ length lead on the approach to Barnes Bridge. However, Cambridge’s obvious determination to get revenge paid off as they took the lead under Barnes Bridge.

With Winckless continuing to warn both crews, it was all to play for in the final stages of the race and Cambridge’s lead was reduced to just a canvas by Dukes Meadow. Brookes put on a final push which Cambridge just could not match, and moved away to a victory of just 1/4 length at the Boat Race finish line just before Chiswick Bridge.

Speaking after the fixture, CUBC’s Chief Coach Rob Baker said “It has been really useful racing for us. Our crew will have learned a lot from it. They stepped up their game in the second piece, but they needed to. It gives us plenty to go away and work on in these important few weeks before The Boat Race.”