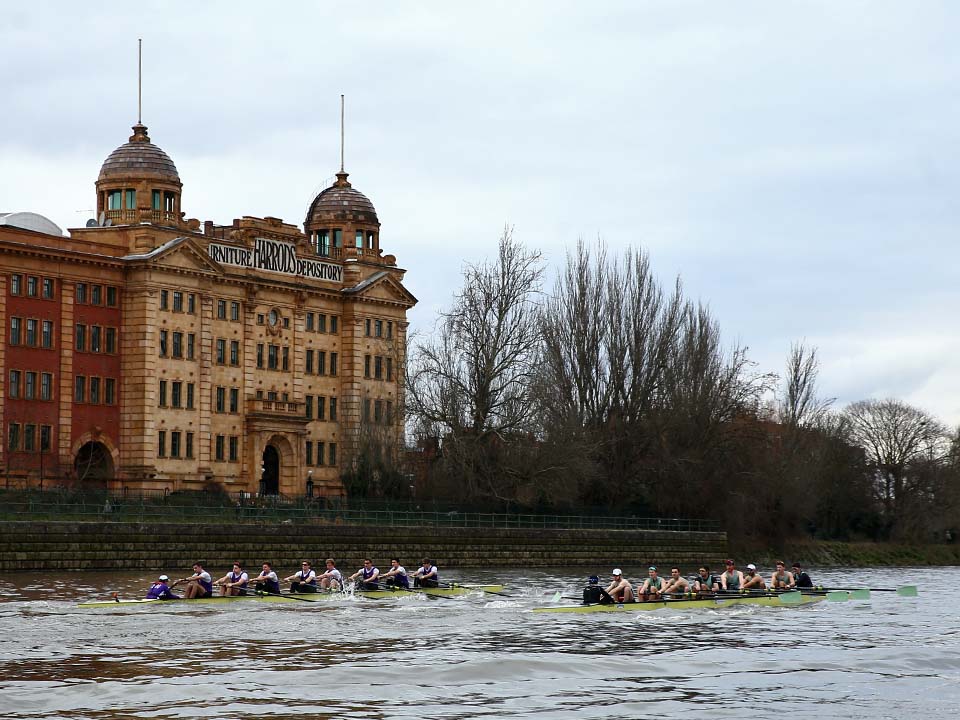 Cambridge University Men’s Boat Club saw off stiff competition from the University of London in a three-piece fixture to continue their preparations for The Cancer Research UK Boat Race 2018.

On a calm Tideway, Cambridge took to the water having claimed the fastest time of the day at Quintin Head in January. The first piece began at Putney Bridge, and it was UL who got the better start after the crews clashed in the initial strokes. Umpire Rob Clegg continually warned both boats as they veered into unmarked water, but the disruption allowed Cambridge to regain their composure and draw level. Passing Fulham, the Light Blues had taken the lead and were straining to break clear. Their mid-race rhythm was impressive, as they grabbed hold of the contest and began to control it by utilising the power of their middle four and dynamism of their stroke pair. As the crews passed Harrods Depository, the race was all but decided, with Cambridge commanding a three length lead.

The second piece began at Harrods, with UL on the Surrey station. Cambridge immediately took half a length, but were warned for aggressive steering by the Umpire. Although UL had the advantage of the inside bend, it was Cambridge who continued to do all the heavy lifting as they attempted to break clear once again. Despite impressive purple resistance, the chunkier rhythm displayed by Cambridge eventually told its own tale as they stretched away to lead by two lengths. The piece finished at the bandstand with the Light Blues several lengths clear.

The third and final piece began at Chiswick Eyot and ran until the finish of the official course. The almost obligatory opening clash occurred again, as both crews struggled starting on a bend. Cambridge, having perhaps gained some insight into the mechanics of a clash, emerged the steadier of the two and began to draw away from UL. Despite a considerable effort on the inside of the Surrey bend, the latter were unable to reel in a machine-like Cambridge, whose superior power and balance in rougher water paid dividends. They went from a length to two lengths fairly quickly, and controlled the remainder of the race to complete the set and claim victory across all three pieces.