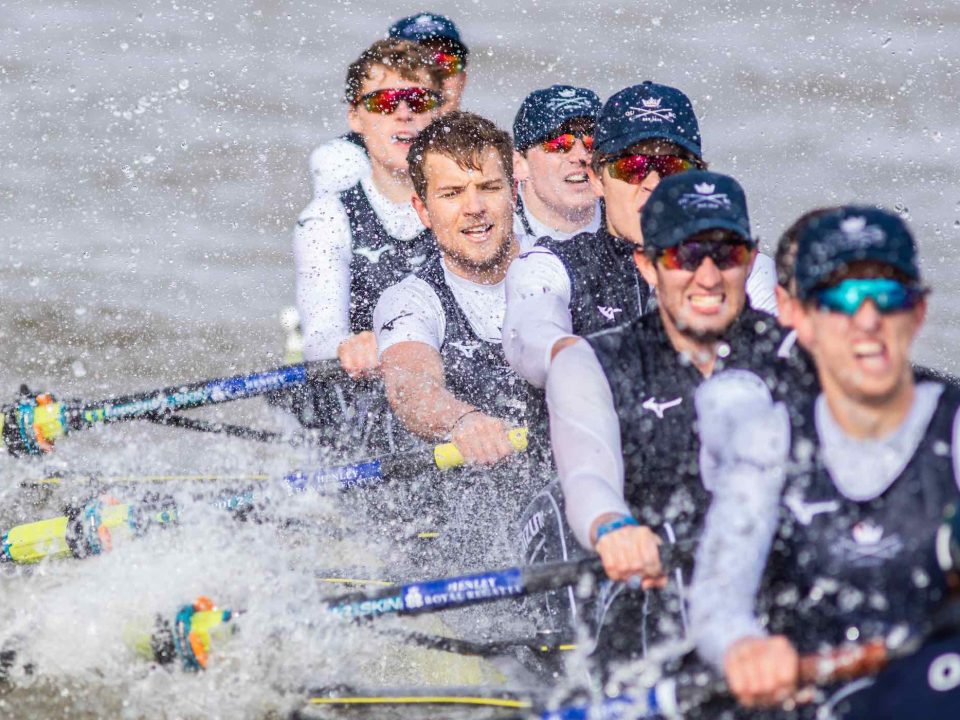 The first official fixture for OUBC saw them take on Oxford Brookes University, on a day where the Tideway demonstrated why it should it be revered.

After Oxford Brookes won the coin toss, they elected to take the Middlesex station for the first of two pieces; both scheduled to take place between the Start and St Paul’s School Boat Club, utilising a limited section of the Championship Course due to the high winds and resulting challenging conditions beyond Hammersmith Bridge.

10 strokes into the first piece, the boats were level; however, Brookes then encountered some rough water as the crews became exposed to the wind. This allowed OUBC to pull out to a ¾ of a length lead over Brookes by the Town Buoy, however a big effort from Brookes allowed them to get back almost level with OUBC before opening out to ¼ of a length by Barn Elms, albeit due to the Fulham corner being to their favour.

To the milepost, this margin was constant, however Umpire Sarah Winckless warned OUBC repeatedly for their line, although no incident ensued.

By Harrods’ Furniture Depository, OUBC had managed to bring this to level, which put Brookes under pressure from Umpire Winckless, and although there was no significant contact, if any, this was the closest these two crews came in this piece.

Between Hammersmith and St Paul’s, OUBC pulled out to a 1.25 length lead to seal the victory in the first piece, marking the first time Brookes have been defeated on British Water in 3 years.

It appeared that Brookes struggled in the rough water, and the early push they put in meant they had no card to play after OUBC’s trump move.

Between the finish of the first piece and the start of the second, the wind had picked up considerably, which moved the start to in front of London Rowing Club, where the boats would be considerably more sheltered.

After alignment from both Sean Bowden, OUBC, and Henry Bailhache-Webb, Brookes, and the coxes were happy, the second piece was underway. With the crews switching stations, it was all at stake. Again, the crews were level off the start, with Brookes sneaking a canvas lead by the Town Buoy.

By Barn Elms, Brookes had managed to increase this lead to about 3 seats, but with incredibly choppy water, and a couple of missed strokes by the Brookes Bowman, this allowed OUBC to move back around Fulham. To maximise the advantage meant some aggressive steering from OUBC cox, Perry, attracting warnings from Umpire Winckless.

Just before the mile post, OUBC were warned, then as the crews pulled level, both crews were warned. Neither crew reacted with enough vigour which resulted in a clash of blades but with no major repercussions. Post clash, Brookes carried forward their momentum, and continued to move on OUBC, advancing this lead to half a length by Harrods. The conditions by this point had become significantly more challenging than during the first piece with a big wave knocking OUBC back at Harrods before a subsequent wave swamped the boat.

The Surrey station meant there was a clear advantage, which allowed Brookes to pull out to clear water by Hammersmith, which prompted OUBC to move over and gain shelter from the Surrey station. By St Paul’s, Brookes had two lengths of clear water winning the second piece.

Commenting on the fixture, Sean Bowden, OUBC Head Coach said: “In tough conditions I was pleased that we put together some sections of competitive rowing against a very good Brookes crew. Mistakes by both boats at different times were costly but contributed to some intense racing with plenty of cut and thrust. The conditions in the second piece were awful and with a swamped boat we were not able to hold on to a fast moving Brookes who no doubt had problems of their own in the big rolling waves that crashed over the bows on a number of occasions.”

Once again, the Tideway played the role of the 3rd competitor in the fixture, setting challenging conditions for both the coxes and rowers and also providing invaluable experience of what OUBC might have to face come Sunday 29th March, Race day.

Image credit: All Mark One