On Your Marks, Get Set, #smartrow 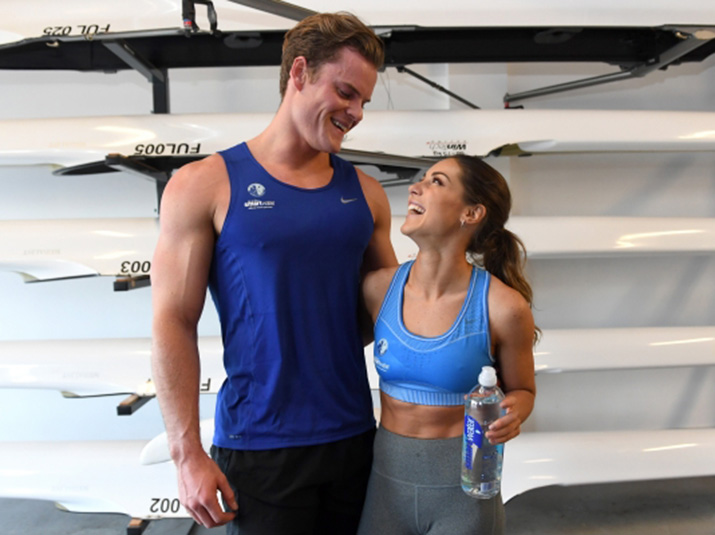 To celebrate their first year as the Official Water Partner for The Boat Race, smartwater pitted Made in Chelsea stars Louise Thompson and Ryan Libbey against each other in a rowing challenge inspired by the famous Boat Race Course at Fulham Reach Boat Club.

The two reality television personalities were each made the captain of a team, with Louise leading Team Oxford while Ryan joined Team Cambridge. The challenge was simple: a 6.8km rowing relay on two Concept2 indoor rowing machines positioned side by side. On hand were experienced athletes from Oxford and Cambridge to lend advice and tips on how to best perfect a notoriously challenging technique. Isabell Von Loga, then President of Oxford University Women’s Boat Club, opened proceedings explaining that ‘we train around twelve times a week, and depending on the British weather, between four and ten times a week we use the ergo. It’s a lovely beast that we love to hate.’

The relay was split down into 15-stroke intervals, with Louise and Ryan both in the starting blocks for their respective teams. Off the line, they provided the perfect demonstration of two halves of the rowing stroke – power and technique! It was neck and neck for the first couple of km, with each team spurred on by a crowd of roaring teammates to keep their adrenaline pumping. But it soon became clear that Ryan’s team were benefitting from smoother changeovers and they eventually opened up a six second lead on Louise’s team which was never relinquished.

After the race and team photos had concluded, Louise said: ‘We were so lucky to have such an amazing team, with the professional rowers as well. We’re surrounded by the best. And it was great to have diversity – there were people who don’t row, people who have tried rowing, and then the uber rowers.’

Ryan added: ‘We’ve never really rowed before, so it was new to us as well. My body is now screaming at me.’

After the success of the indoor rowing challenge, there will be more plenty more smartwater action coming up in the next few months – so keep your eyes peeled!