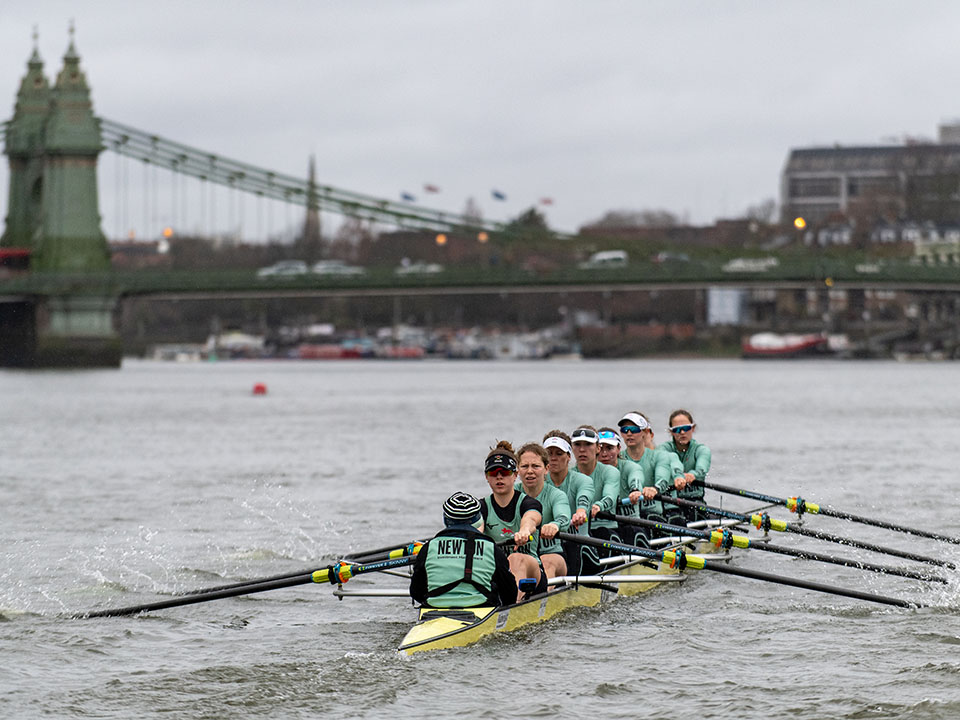 Cambridge University Women’s Blue Boat took to the Tideway once more, for their second and final official Boat Race fixture. The weather worsened throughout the fixture against, particularly as the crews came into more open water around the Mile Post. It was a good chance to see how Cambridge would perform in tricky Tideway conditions which contrasted to the near-perfect conditions that they had for their last fixture against Nereus.

Cambridge won the coin toss and elected to have the Surrey station which they remained on for the duration of the fixture. The fixture was split into three pieces; the first piece was from the Start to the Mile Post. Both crews got away cleanly at the start albeit Cambridge went off slightly stronger. Cambridge held a small, but noticeable lead for most of the first piece, increasing the distance approaching the finish at the Mile Post. Oxford Brookes were warned by the umpire for steering a line too close to Cambridge repeatedly throughout the first piece. Cambridge finished the piece half a length ahead of Oxford Brookes.

After a debrief with their respective coaches, both crews prepared for the second piece from Harrods Depository to Chiswick Steps. A rolling start saw both crews start strongly, with Cambridge gaining an early lead over Oxford Brookes. Cambridge had an early warning from the umpire to stick to their station which was then followed by a stern warning to both crews to move apart, as both coxes fought for the central position. The conditions quickly worsened which allowed Cambridge to pull clear from Oxford Brookes who began to struggle in the wind. In search of calmer water, Brookes’ cox aggressively steered the crew over to the Surrey station while Cambridge continued to row clear of Brookes. Cambridge finished the second piece with a strong lead over Oxford Brookes.

The crews once again debriefed with their coaches, giving Brookes a chance to soak up the water which had been taken into the boat during the second piece because of the rough river conditions. The final piece was from the Bandstand to the finish. In a similar style to the second piece, Cambridge had a strong start which led to them quickly gaining a length over Brookes. Heading under Barnes Bridge, both crews found some calmer water which allowed Cambridge to continue to pull away. Cambridge were able to pull away enough from Oxford Brookes that they could to position themselves in front of Brookes and steer the desired line around the corner. Cambridge continued to look strong and remained composed throughout the final piece whereas Oxford Brookes began to struggle in the tricky conditions. The final piece finished with Cambridge three and a half lengths ahead of Oxford Brookes.

This fixture saw Cambridge put in a very strong performance in some challenging conditions, winning all three pieces. It will no doubt have given them a confidence boost heading into The Women’s Boat Race.