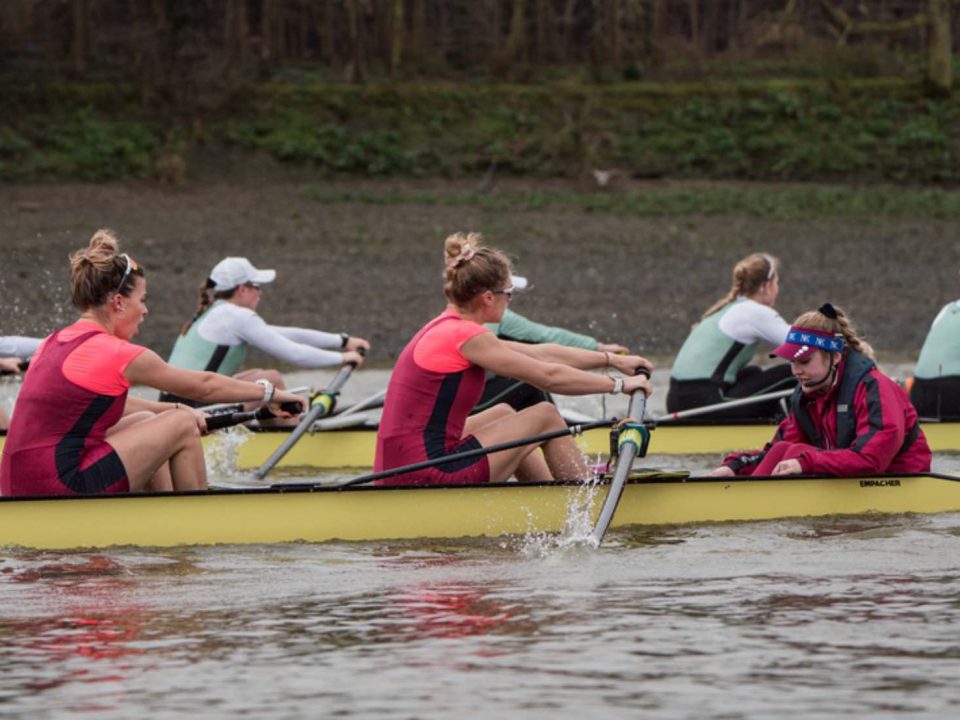 Following their strong performances against ASR Nereus last weekend, CUWBC once again took to the Tideway under stormy conditions to race their second fixture of the 2020 Boat Race season, against Oxford Brookes University Boat Club. The CUWBC Reserve Crew, ‘Blondie’, and lightweights also faced Brookes II and III respectively in an eventful morning of racing.

The first piece took place from The Boat Race finish to Chiswick steps, which represented excellent preparation for both crews ahead of the upcoming Women’s Head of the River on 7th March. The crews were aligned by CUWBC Chief Coach Robert Weber, and upon the ‘go’ of Women’s Boat Race Umpire, Judith Packer, both crews got off to a strong start. Brookes, under the tutelage of ex-CUBC Assistant Coach Richard Chambers, made the most of the advantage from the Middlesex bend and took an early one length lead in the first few minutes.

Both crews were warned coming into Barnes Bridge, after which the Brookes crew pushed on to take clear water over the Light Blues. By the bandstand there was significant wash from passing river traffic, which created challenging conditions for both crews. However, Brookes’ rhythm proved resilient and the crew from Oxford continued to press ahead. The final verdict at Chiswick steps was 4 lengths to Brookes.

In the second piece, Brookes once again took an early lead on Middlesex and by the end of the eyot had a one length advantage, which stretched to two lengths by St Paul’s. Despite having the benefit of the Surrey bend, CUWBC continued to succumb to the Brookes charge which resulted in a three length lead by Harrods’ wall. This stretched out to a decisive five length victory to Brookes by the Town Buoy.

This fixture, which provided both strong opposition and dramatic conditions, will surely be an invaluable learning experience for the Cambridge crew in their preparation for The 2020 Women’s Boat Race on the 29th March.

Image credit: All Mark One