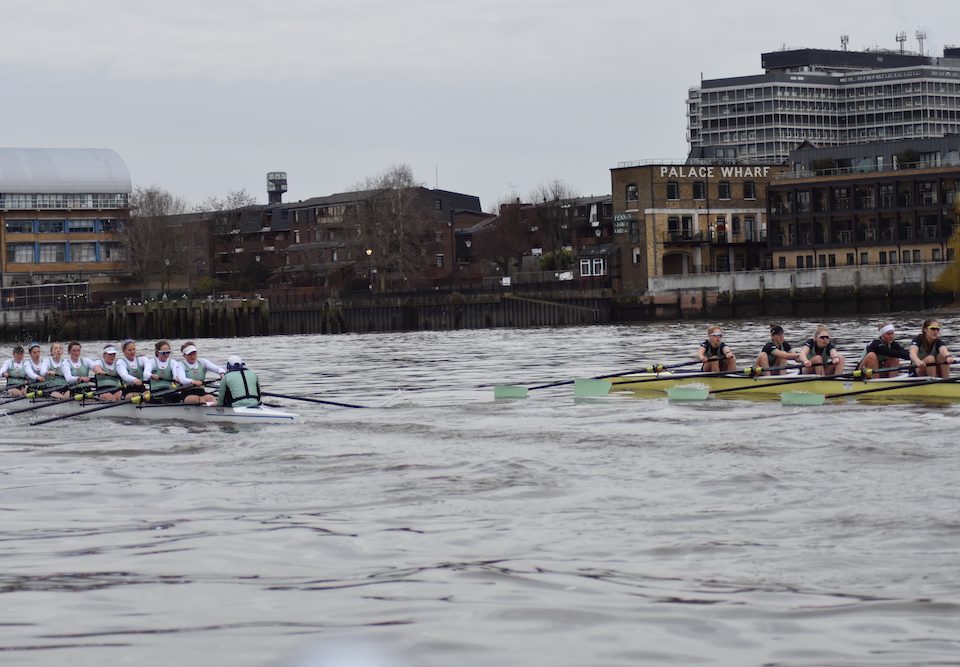 The CUWBC Trial Eights took place on a cloudy, but calm, day on the Tideway, the crews having trained in some testing conditions in the days before.

This year’s squad has a large number of medics and biologists in the squad, so CUWBC chose to named their crews Actin and Myosin after the two muscle fibers that pull against each other in the human body. Myosin raced in black and Actin in white, saving the traditional Light Blue kit for Boat Race day.

2019/20 CUWBC President, Larkin Sayre, was selected to race in Myosin and, following the briefing with Umpire Judith Packer, tossed the coin to select station. They lost the toss, and Actin chose to race on the Surrey station.

Following a very efficient and swift start, the two crews kept well apart, giving the umpire no cause for concern. Actin took a very slight lead by the Black Buoy, and then gradually extended this lead, being several lengths ahead of Myson by the time they reached Hammersmith Bridge.

Actin’s lead was over 4 lengths by Barnes Railway Bridge, and they looked to be in a commanding and comfortable position. On the final approach to the finish line just before Chiswick Bridge, Myson put on a strong push and closed the gap, but Myosin remained in control and crossed the finish line some two lengths ahead to take the Victory.