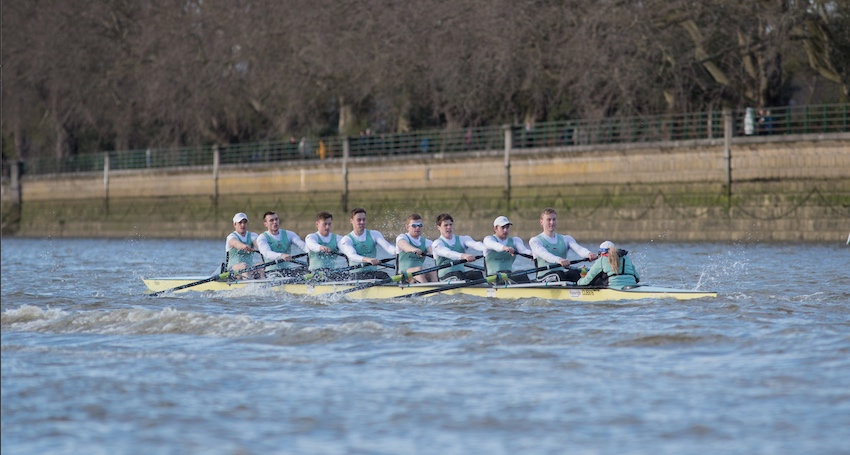 This Sunday’s fixture saw the prospective CUBC reserve crew, Goldie, take on the Oxford Brookes University second eight. The conditions matched those of Goldie’s first fixture against Imperial, which saw a tough headwind and the tide running against them.

Goldie won the toss and chose the Surrey station for the first piece from Putney Bridge to the Chiswick Steps. Both crews got off to a strong start, with Oxford Brookes taking a 3 seat lead at the black buoy. A tactical tight corner around Craven Cottage and a well-placed push saw the Brookes crew extend their lead to a length. Goldie missed an opportunity to respond, and found themselves clear water down by the Milepost. Despite an aggressive rhythm from stroke Hugo Durward, the more powerful Brookes crew continued to move away around the Surrey bend, finishing the first piece a comfortable 4 lengths ahead.

The crews swapped stations for the second piece from the Chiswick Steps to the Finish post. Now off a rolling start, Goldie attacked hard to minimise the disadvantage of the initial bend, leading to a warning from umpire Tony Reynolds. A valiant effort from the Goldie crew saw them hold contact till after Chiswick Pier, however a push to narrow the margin was successfully held off by Brookes, who opened up a clear water lead. A tidy and aggressive Goldie continued to fight, but to little avail as Brookes continued to move away, finishing the final piece again some 4 lengths ahead.

In reasonably difficult conditions, Goldie were overwhelmed by a dominant Oxford Brookes crew. The fixture was undoubtedly invaluable preparation for likely conditions on the Boat Race Sunday; which is now in fewer than 30 days. The Cambridge reserves will doubtless be working to ensure that this result is reversed on the 29th March.