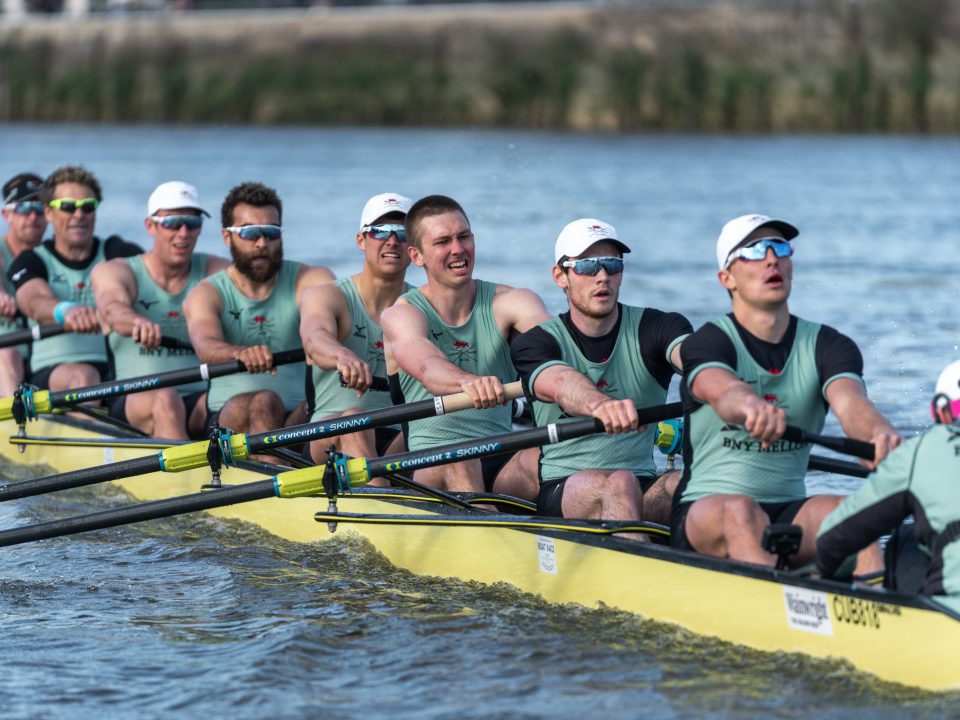 The final official fixture before The Men’s Boat Race on the 7th April saw CUBC take on Oxford Brookes in a match originally scheduled for 13th March but rescheduled due to adverse weather. Brookes had made two alterations to the line up that had raced OUBC the week before, bringing World Championship gold medallist Tarrant and former Oxford Blue Bugajski in place of Nunn and Antognelli.

Brookes won the toss and chose the Surrey station. As the crews came under Putney Bridge to start the fixture, umpire Rob Clegg was unhappy with the positioning and sent both crews back to line up again. Cambridge had the better start, sitting 5 seats up at the Town Buoy and held this margin till the Mile Post. Following repeated warnings for steering and several clashes, Brookes gave a push into Harrods that saw them inch in front as the Surrey bend swept in their favour. Cambridge fought hard to minimise the bend’s advantage and coming along Chiswick Eyot Brookes lead by ¾ of a length. A finishing sprint from both crews saw Brookes finish the first piece 2/3 of a length in front of Cambridge.

The crews kept their stations for the second piece and again Cambridge had the stronger start. Despite the outside of the first bend around Chiswick Pier playing to Brookes’ favour, coming into the Middlesex bend the Cambridge cox was alongside the Brookes’ bowseat. Steering was aggressive from both crews and through Barnes Bridge Freddie Davidson and Sam Hookway of Cambridge were clashing significantly. A large clash just after the bridge saw a crab in the Cambridge boat which snapped the backstay of the 6 seat rigger. Cambridge, now a length down, attacked hard around the final bend and clawed back a seat from Brookes, finishing the final piece just under a length down.

Cambridge put in a very strong showing against an immensely impressive crew from Oxford Brookes, putting them under significant pressure in both pieces. As the crews enter the final two weeks of preparations, both will now be looking to fine tune their racing rhythm for the 7th of April.