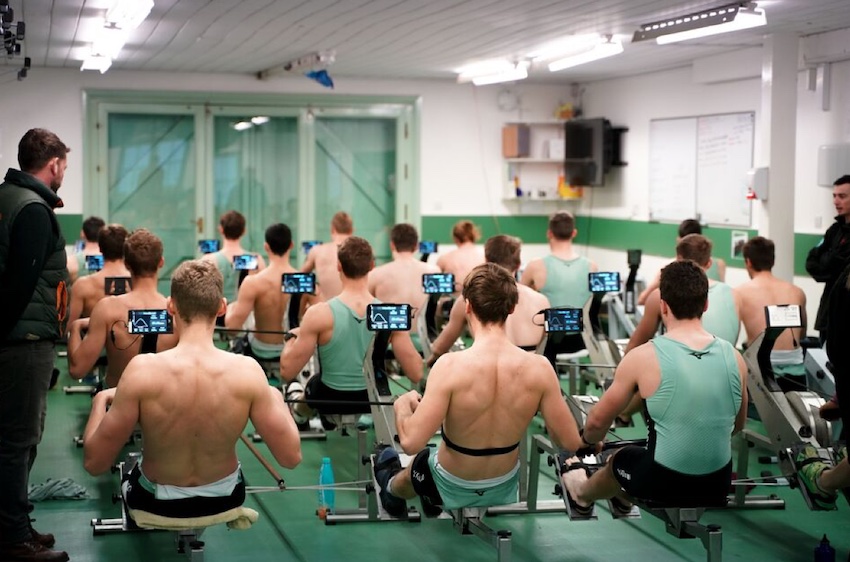 Looking back on the last month’s training, there has been a clear theme of development in the squad. We have been challenged in many ways: the weather of storms Ciara and Dennis, our latest 5k erg test, the constant drive to technical perfection, and for our Goldie-elect and 3rd boats fixtures against Imperial College, but there has been a constant drive to improve and step on through this section of training.

In many ways, the gale force winds have been great Boat Race preparation: developing our rowing to handle block headwinds, fast flowing tails, gusty cross winds and the rougher water that comes with it sets us up for whatever the Tideway can throw at us. Other races may be cancelled due to weather, but The Boat Race runs rain, hail, or shine.

The final 5k ergo test of the season is an important marker: it shows the triallists’ progression through the year and provides the coaches with another illustration of how we respond to a challenge. When the lactate builds up and it would be so easy to let the split just drop by one second, they will look for athletes who take up the challenge and make their split better under the pressure. Doing a 5k is never pleasant, but it’s great to be told afterwards that your squad didn’t take a backward step when the acid was on.

Although the Blue Boat elect is looking forward to its fixture against Oxford Brookes on March 1st, our prospective Goldie and 3rd 8 lineups took on Imperial College recently, and showed strongly against good opposition. The Goldie lineup led each piece and demonstrated some real control and patience under significant pressure. Despite a challenging first piece, the third eight put in an impressive showing in the second, with a 4 length improvement across the two races.

It’s the first time that I know of that CUBC has boated a third eight, and we’ve done it with a focus on broadening the squad and developing athletes for as long as possible. We’re proud of the athletes who have learned to row at Cambridge: this year’s Blue and Goldie boats will include a number who have learned to row with their colleges then proceeded through the Development Squad to represent CUBC.

We’re working well as a squad. Everyone is pushed every day to get better through the competition for seats as well as the intrinsic motivation of seeing improvements in the boats’ speeds. Over the next weeks, we will hope to demonstrate this against our fixture opponents from Oxford Brookes and the Dortmund Training Centre, and set ourselves for the 29th of March.