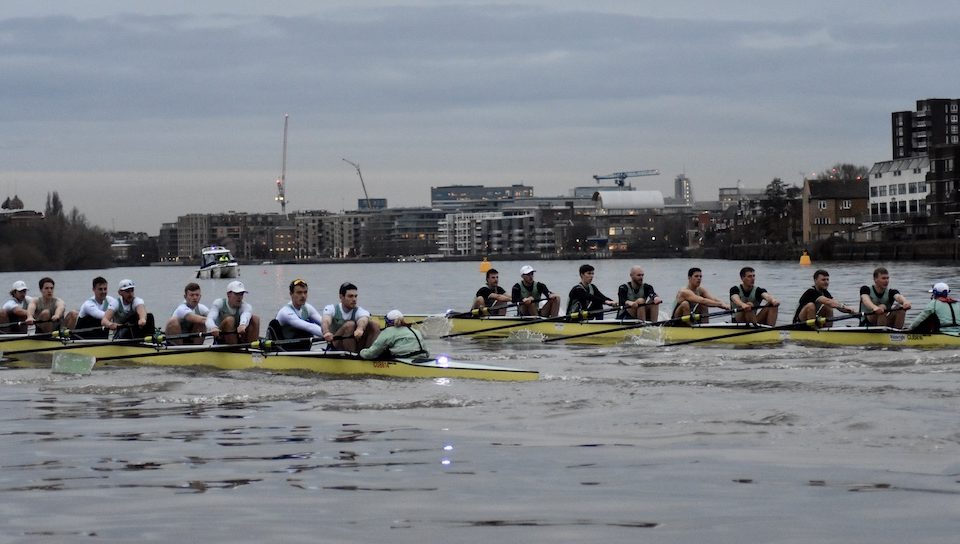 The CUBC Trial Eights took place on the equivalent tide to the one that they will race on Boat Race Day which fell at 15:45, meaning the crews required lights.

Despite the reduced level of light, the conditions were similar to that of the CUWBC Trial Eights race an hour earlier. The crew names chosen by CUBC were “Electric” and “Boogaloo”. Boogaloo tossed for stations, won, and chose to race on the Surrey Station.

Sarah Winckless had umpired the OUBC Trial Eights Race the previous week and will also umpire The Men’s Boat Race on the 29th March 2020. As a result the Trial Eights race was a good opportunity for the Squad to understand how she is likely to take charge of the crews on Race Day.

The crews were still level by the time of the Black Buoy and it became clear that an exciting race was in store, but that Sarah Winckless was likely to be kept busy. Indeed, by the Milepost, Electric had crept out to a 1/4 length lead, but had received warnings for their steering from Winckless.

Narrowly avoiding a clash with each other, and after having to be steered around an errant cruiser, Winckless warned both crews and the coxes responded, returning to their stations.

As Hammersmith Bridge came into sight, Boogaloo knew they had the advantage of the long Surrey bend and were the first crew under the bridge, extending their lead to 3/4 length at St Paul’s, and then 1 length of clear water passing Chiswick RNLI station.

Umpire Winckless was kept busy in the final stages as Electric looked to take advantage of the Middlesex bend around Barnes Bridge, closing up the gap. Electric wound up for home first, and Boogaloo had to respond to maintain their lead which was no more than a length as they crossed the finish line.